pdf
ON THE COVER:
Who Is Stella Burden, and Why Are They Saying Those Terrible Things About Her?
features

Beloved – and snubbed – at home, Sinclair Black to be nationally honored for lifetime achievement

New Urbanism and the Booming Metropolis

Austin welcomes the Congress for the New Urbanism XVI

Who's Responsible for the Littlefield Spill?

Rich Oppel stepping down in June, at which point Managing Editor Fred Zipp takes over

The times and places

BY RICHARD WHITTAKER AND WELLS DUNBAR

Onward through the smog

Come On, Congress, Get Some Gumption; and No Punishment for Exxon Malfeasance?

Gourmet on the Go

St. Dalfour's premade meals in a can are perfect when you're on the run 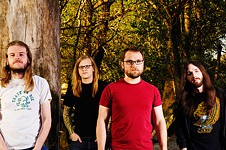 We Come From the Land of the Ice and Snow

A prostitute-turned-pop-star exposes her Austin roots; Voxtrot readies for round two; and Rock City Icehouse goes to 11

After a moviemaking hiatus, writer/director Kimberly Peirce returns to screen with Stop-Loss

On the Road, From San Fran to Taipei

The Mad Ones: The Beat Film Series

Austin's hopping again, with TV and film projects set to shoot soon; plus, Smithville's got a Poop Bandit

If you're someone who doesn't snicker at the tight, flashy outfits and the flying-saucer-sized sombreros, then you will appreciate Compañeras, about the first all-female mariachi band in the U.S.

Shutter is a shabby American remake of a Thai movie about a couple who sees mysterious images in photographs.

A real-world fuse burns throughout the military drama of Stop-Loss, the Austin-lensed film by Boys Don't Cry's Kimberley Peirce that stars Ryan Phillippe.

Kevin Spacey plays Mephistopheles to a cadre of M.I.T. whiz kids, who do a better job of counting cards at the Vegas blackjack tables than counting their loot.

Executive-produced by Robert Redford and Terrence Malick, Dunn's award-winning documentary looks at the history of Barton Springs, Gary Bradley's role in development issues, and the relationship of Austin's environmental activism to the world at large.
arts & culture

Who Is Stella Burden, and Why Are They Saying Those Terrible Things About Her?

When the Rude Mechs do a show about acting, they find madness in the Method

For 22 years, the electrified mural on Fifth Street has been a local landmark, but now it's coming down

This stage comedy is about just who you think it is, only the well-known guys are played by gals

The Brats of Clarence

The Bedlam Faction's latest is a wildly entertaining marriage of Shakespearean history and wacky, absurd humor

Jess: To and From the Printed Page

Nations get into deep trouble by following inspirational leaders, left or right

It's easy to blush around hunky Cliff Redd

The first modern water bed, the last chance for witches and their friends to stir up trouble before spring, and more