Can Austin Waste Not?

At Your Solid Waste Service

The Dirt on Composting

Austin is No. 1 in digital video recording

A recap of the plans so far

Conservative conference points toward next Legislature

RG4N Vows to Fight On

What the consultants have to say

After some procedural and PR bumps, City Council moves to name a new city manager

A look at the CM finalists, and the search

Foreclosing on Renters; and The Olympics: Let the Spying Begin

Christian Moueix makes a few wines for the rest of us

New Austin Javas sprouting about town, beer and veggie pies for all, and a once-in-an-lifetime foodie vacation 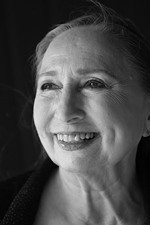 'Sister Bobbie' puts the 'Family' in Willie Nelson and Family

The Musician's Guide to the Road: A Survival Handbook & All-Access Backstage Pass to Touring

Changes in the Weather

As Burnt Orange cools down, UTFI heats up

The Biography of Burnt Orange

Here's Blood in Your Eye

Fangoria's Weekend of Horrors eviscerates the 512

Golden Globes were a big bust, but the new Terminator series opens an impressive can of whup-ass

Cloverfield is a pure-blood, grade A, exultantly exhilarating monster movie in the grand tradition.

Ice Cube and Tracy Morgan play petty criminals who spend a night reckoning with the lord when they rob their neighborhood church.

In the Name of the King: A Dungeon Siege Tale

Uwe Boll, the Timex watch of contemporary filmmakers (he takes a licking but keeps on ticking), strikes again.

The Pirates Who Don't Do Anything: A VeggieTales Movie

This powerful character study and origin story is rooted in American soil.

We predict a happy union between 27 Dresses and cable TV, forever rerunning with commercial breaks tailor-made for laundry-loading and sandwich-making.
arts & culture

The stunning art collection of the Dell Children's Medical Center

More Than Something Hanging on the Wall

Back in her home state full-time, the noted artist shares her work and what she's learned in 30 years of making art

The production manager for the choral group Conspirare has died

Vortex's revival confronts issues of the body – as object, as weapon, and as prison – head on

The artist's self-proclaimed graveyard of old art doesn't make for a tight show, but it's an ambitious one
columns

Page Two: The Moment Belongs to the Music

Before the presidency is anything else, it's a job – a job that requires a dash of corruption

Is Stephen a closet furry? And what did Dr. Twink diagnose?

Texas Homestead Exemption – What Is It?