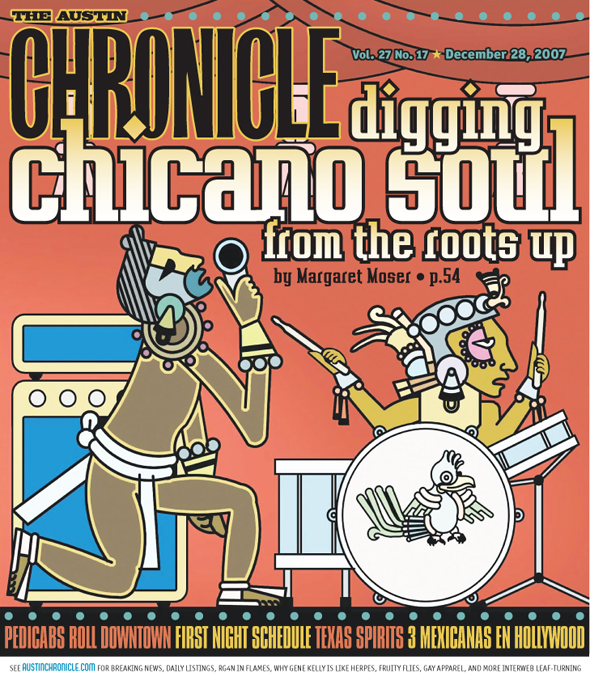 pdf
ON THE COVER:
A Browner Shade of Black
news A profile of the practice and business of pedicabbing

Does Harry Potter Cause Sexual Violence? Only in Texas.

'I'm the Realtor for the state of Texas,' Patterson says

Local effort to get rid of plastic bags growing

WTP 4: Home for the Holidays

Road to decades-delayed Water Treatment Plant No. 4 may be coming to amicable end

What awaits council under the tree

Commander Bush Wins One; and Gifts for a Happier New Year Texas Gets Spirited Away

Taste-testing Texas liquors against the world

Viking Range Corp. mixes and kneads with the big boys

Looking back on Austin food in 2007

Southern Belly: The Ultimate Food Lover's Companion to the South

A Browner Shade of Black

Welcome to "Spazmodica," the future of Austin music

Leaves in the River

Long Road out of Eden

Rokku Mi Rokka (Give and Take)

Growing Pains, As I Am

ThisIsMe Then: The Best of Common

The Best of Lisa Gerrard

Photograph: The Very Best of Ringo

Vintage '47: The Best of Jim Stricklan

The first announcements from SXSW Film 08 are trickling in

'Tis the season for TV marathons, plus, mark your calendar for the last season of The Wire, and no news is bad news on the strike front

One of the most influential films of all time, it's almost superfluous to discuss the film itself and its considerable merits

Nicolas Cage is again on the prowl in this sequel to the 2004 smash success.

Although Guillermo Del Toro is the producer, this new Spanish horror film is derivative and not on par with Del Toro's spooky childhood stories.

Starring Laura Linney and Philip Seymour Hoffman, this smart, funny, thoughtful, and exquisitely realized film is one of the best of the year.
arts & culture

Celtic Christmas at the Cathedral

Stephen's calling the kettle black again. OK, these are some pretty black kettles.

While only a freshman at Westlake, Brenden Redfern is already putting adults to shame on local golf courses

What to expect in 2008: a great earthquake, a pole shift, many months of darkness, Princess Diana's ghost, and much more

I ordered a holiday present, and it never showed up

No break for the Brits, and more