Give 'Til It Helps, Part 2
news

The Trail of Dead

Constable Gary Griffin's attorney: 'This case is not over.'

Green Vs. Greenbacks: What about affordable housing?

Gary Griffin's in-car video from his confrontation with Joseph Cruz

Happy holidays to all, from 'Beside the Point'!

Look local for the holidays, Christmas Day dining at Manny Hattan's, and more

TRIO at the Four Seasons

Along with a name change, TRIO at the Four Seasons on Lady Bird Lake has reinvented itself in ambience, decor, menu, and wine list

Lobby Lounge at the Four Seasons

Runnin' Down a Dream

Respect Yourself: The Stax Records Story, Stax/Volt Revue Live in Norway 1967, Dreams to Remember: The Legacy of Otis Redding

The Concert for World Peace

Last of the Breed: Live in Concert

U.F.O.s at the Zoo: The Legendary Concert in Oklahoma City

Lord Don't Slow Me Down
screens

Rally 'Round the Writers

What's It Good For?

Denzel Washington directs and stars in this inspirational but predictable drama set in the Jim Crow South of the Thirties.

Khaled Hosseini’s bestselling novel is brought faithfully to the screen, although the melodramatics of the story's latter section undercuts the poetic drama of the first half.

Academy Award-winner Hilary Swank needs to call her agent before getting involved in any more romantic codswallop like this.

Tim Burton's adaptation of the Stephen Sondheim classic shows just how dull violent retribution can be when it's all someone ever talks (or, in this case, sings) about.

This new Bollywood picture tells the story of a teacher and his dyslexic student.

Taking cues from Ray and Walk the Line, this comedy biopic spans 70 years in the life of its hero, the fictional music legend Dewey Cox.

Woody Harrelson stars as a professional escort for political wives in this Paul Schrader movie about sex, murder, scandal, and adultery in Washington, D.C.

The Water Horse: Legend of the Deep

This adventure fantasy about a boy's involvement with a mysterious animal is also a period story about childhood anxieties.
arts & culture 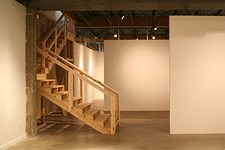 Reflections in a Blank Wall

Florian Slotawa's exhibition tells us more about Arthouse than the artist

After running UT's College of Fine Arts for a year, interim Dean Doug Dempster has gotten the job for keeps

Gibbs Milliken, one of the UT Art Department's most adventurous instructors, has passed away at age 71

Paramount Theatre: A million in its stocking

It's a green Christmas for the Paramount Theatre, with a $1 million grant in its stocking

The Texas Choral Consort's holiday concert was a tale of two choirs: one inspired, the other flat
columns

At its best, the government is an exploding, bloated, graceless machine. That just means it's working.

On baseball juicers and the president: Get away with whatever you can

The virtual improbability of online coupling, Picasso's superstitious aversion to charity, and more

Ripped Off During Holiday Shopping