pdf
ON THE COVER:
Caught 'Em in Autumn
news 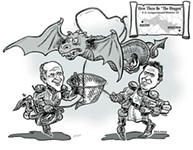 In their own words

Could the Texas House Turn Blue?

Courtside: From Meurer to Earle

Other Races Worth Watching

The Democratic candidates discuss the issues

Portrait of a Refugee

No Christmas Present for Private Land-Purchasers?

At fourth annual Women and Fair Trade Craft Sale, holiday shoppers are invited to learn about fair trade, and to support local and foreign women's organizations affected by immigration

What the DPS Doesn't Want You to See

Why does it insist it can't release video footage of a Capitol hallway to The Texas Observer? We can only imagine.

Point Austin: MUD in Your Eye 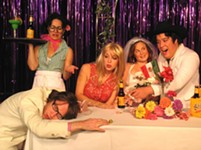 Go hungry, and eat slowly at this Brazilian steak house

Diverse ingredients come together at this Cantonese hot spot
music For many, Chinatown epitomizes the peak of Seventies Hollywood filmmaking and is perhaps the finest neo-noir ever made

Before the Devil Knows You're Dead

Both a crime thriller and family tragedy, this stunner from octogenarian Sidney Lumet stars Philip Seymour Hoffman and Ethan Hawke as brothers whose blood runs cold.

Control, Anton Corbijn's narrative portrait of Joy Division's suicidal singer, Ian Curtis, is easily one of the finest films ever made about the collision of music, madness, and the human heart.

The film’s light hand, appealing style, and simple exposition make it an eminently watchable inquiry into the politics of food, public health, and the reasons why corn has become an ingredient in virtually everything we eat.

Robert Redford's Lions for Lambs, in which he co-stars with Meryl Streep and Tom Cruise, is a piece of nervy political theatre that argues against individual complacency in wartime.

Via a tale of reincarnation, this new Bollywood movie offers a tribute to the Hindi spectacles of the Seventies.

This visually dreamy Bollywood romance is unusually financed and promoted by a Hollywood distributor. 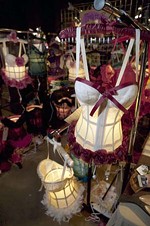 When this performer and friend of the arts died on Oct. 31, the city lost the grandest of its grande dames

Austin Chamber Music Center: Is that a bow in your pocket, or ... ?

For ACMC's next concert, Hot Enough for Ya, the aim is clear: Let's talk about sex

An entrancing swim through issues of communication, discrimination, and history (with a couple of eerie ghosts along for the ride)

In UT's staging of this postapocalyptic fairy tale, we can't help be sucked into the magic of the infinite hole

Despite some enjoyable work by this year's Young Latino Artists, the show overall isn't impressive
columns

At least four factors could determine the nominees and results of the next presidential election, and nobody's talking about them yet

The slipstream of leather, cashmere, faux fur, and designer logos could be seen from space: Stephen is making the scene, people; cut a swath

Tours of Georgia O'Keeffe's home and studio in Abiquiu, N.M., allow guests unique insight into her art and life

Rats in India like curry, at fast-food restaurants there are more bacteria in ice machines than in toilets, and more

Fred Sanford is my neighbor