Angels on a Mission

Are We Masters of Our Domain?

Critics are concerned that rather than boosting local shops, a subsidy deal struck by City Council with developers of the Domain is dropping cash into an already successful project, filled with high-end stores

One council member's view of the Austin Climate Protection Plan

Officer Fired for Unjustified Use of Deadly Force

Was Laura Hall a Murder Accomplice?

Trial of Laura Hall, accused of tampering with evidence and hindering apprehension of Colton Pitonyak in connection with the August 2005 murder of 21-year-old Jennifer Cave, began Aug. 28

A slew of fresh laws for drivers kick in Sept. 1

Beside the Point: An Open Letter to Rich Oppel

Sometimes it's hard not to agree with Rich Oppel

Look Who's Talking About the Budget

Q & A with Rob Kampia, co-founder of the Marijuana Policy Project

Rebuild the Middle Class; and Life in Iraq 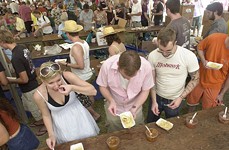 Among the Smoldering Embers

A Culinary Passport to Asia

Another Austinite takes first at the Texas Sommelier Conference; plus, how about Italian tonight? I Wanna Tell You a Story

Inside Western Vinyl's ambience, talking Prince and side projects with Grupo Fantasma's Adrian Quesada, Table Manners Crew operate on all fours, and a 1967 Hoot Night Happening

Let's Talk About It

On the Jimmy Reed Highway

John Schooley & His One Man Band

One Man Against the World
screens

Why the Austin Game Developers Conference Isn't for Gamers

The Austin Premiere of Short Film Works by William Wegman

Cinematexas Heads for That Big Screening in the Sky...

But festival season soldiers on

Goofy pingpong comedy gets by on the amiable nerd panache of chunky lead Dan Fogler.

It's smart; it's silly; it's shear terror, as the ruminants develop a taste for human flesh.

The Boss of It All

Lars von Trier assures us at the outset that this will be a "cozy comedy," the last thing you might expect from this prickly filmmaker. (AFS@Dobie)

No End in Sight

If you're growing as weary of Iraq war documentaries as you are of the war itself, then this sobering, information-filled study of the war's origins is the film for you.

This new release is a remake of the popular Bollywood film Sholay.

It contains some freshman mistakes, but this microindie has such dramatic momentum, such a need to tell its story, that it's well worth a look.

This movie about the Mountain Meadows Massacre of Sept. 11, 1857, during which local Mormons murdered 120 members of a wagon train heading West, reeks of ulterior motives. The making of the 2007 Out of Bounds Improv Festival

Out of Bounds: The lineup

Long Center: Countdown to opening and beyond

Going Over the Top and Other Outrageous Behaviors: Being melodramatic – on purpose

Karen Hastings, a specialist in melodrama and vaudeville, is offering locals a master class in acting the old-fashioned way

Rude Mechs: How great it was, how great

In a banner year, Conspirare signs with the prestigious Harmonia Mundi label and plans a powerful Long Center debut with the Verdi Requiem

Despite its fairy-tale trappings, ethos' opera The Dragonfly Princess takes us down a dark path of intrigues, heresy, power struggles, and death

Babble For Your Soul

Babble for Your Soul is a rare opportunity to see live theatre with very minimal commitment and the pleasure of being entertained, engaged, perhaps edified

'Radical Nautical,' maybe the most jam-packed show in Gallery Lombardi history, is a quirky, energetic celebration of water
columns

Drinking under the influence of no sleep, Schulz on skates, and busty suicidal women

My roommate moved out – Do I have to pay the entire rent myself?

Lady Longhorns open their season this Friday, and more