Photo of Kat Candler by

pdf
ON THE COVER:
A New Day
news

Pearce Gets a New Principal

High test scores at what cost?

Think (and Eat) Globally by Dining for Darfur

Although last Thursday's official City Council pool-cleaning was postponed by weather, the master-plan tour of the facilities at Barton Springs Pool proceeded despite the gentle rain

Is his rep as the campaign killer still intact?

If the DEA has its way, hemp-farming will go to seed 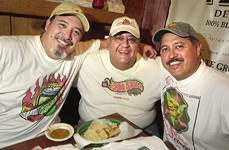 A refresher on how we do things around here

'The Texas Cowboy Cookbook: A History in Recipes and Photos' 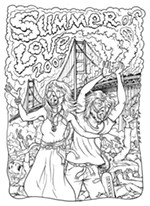 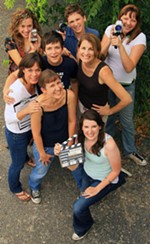 Julie Delpy on 2 Days in Paris

The Austin Film Festival gets Stoned; plus, a Texas Filmmakers' Production Fund update

Eye of the Dolphin

This family film is charming enough to inspire young girls to grow up wanting to swim with live dolphins rather than groom My Little Ponies.

Hindi remake of Three Men and a Baby is set in Australia.

This fourth film telling of Invasion of the Body Snatchers appears to be made by pod people themselves.

Although this story of ancient Rome offers guilty-pleasure fun, the film is not very inspired or well-conceived.

This ragtag biographical portrait plays something like Meet the Parents vs. Shakespeare in Love: A Farce in Three Acts.

An awful lot of good talent was squandered on this by-the-numbers film version of the bestselling tell-all about the child-rearing habits of the rich.

Several morality plays vie for attention in this story about a workmanlike sportswriter who latches on to a tale told by a homeless alcoholic as his ticket out of palookaville.

Right at Your Door

Harrowing doesn't even begin to describe this low-budget exercise in siege paranoia, which builds on our current terrorist-related night sweats.

On the surface, Rocket Science is yet another quirky high school movie, but its story of a stutterer who's enticed into joining the debate team is special in its own way.

Julie Delpy debuts as a feature-film director with this smart and funny romantic comedy.
arts & culture

Guy Roberts has resigned as artistic director of the Austin Shakespeare Festival, and Ann Ciccolella has been named his successor

The weekend forecast calls for an umbrella – Dance Umbrella, that is, and its annual showcase of short performance works

Joe York, who for more than 20 years was the city's leading leading man and one of its most gifted theatre directors and designers, has died

Considering media objectivity and losing yourself in art

This week, Stephen dukes it out with a real queen

Montezuma Red by Elizabeth Arden: the lipstick that says sexy and deadly, perfect for your Marine daughter

Lady Longhorns get their season started on the road, and more