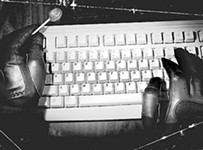 Investigators run roughshod over rights in hunt for cybersex offenders

Was Reba the dog euthanized or stolen?

The Continuing Education of Rick Perry

An old refrain was sung yet again Tuesday in a Senate hearing – the governor goes on a veto rampage, leaving legislators (and others) to wonder why his objections to their bills didn't come up earlier

Foreign spying on Americans; and where are they now?

Preparing for the Hatch Chile Invasion

If the name sounds familiar, it's because the Yim family helped introduce Austin to dim sum at the original location way back when

When I heard that the founders of Esther's Follies were opening a restaurant/music venue, two questions immediately came to mind
music

The Gospel of Progress

Micah P. Hinson lands in Austin – hopefully not on his back

The Gospel According to MPH

The Elephant in the Living Room

Peeping inside a Broken Clock; Stag Records rolls out the red carpet; the Jazzus Lizard meet their maker, and more

The Hair the TV the Baby & the Band

Tijuana Moods, Cornell 1964, Music Written for Monterey 1965 Not Heard... Played in its Entirety at UCLA

Storms: My Life with Lindsey Buckingham and Fleetwood Mac

Rain, Broken Glass, and a Dead Body in the Dumpster

Competitor Steve Wiebe on The King of Kong

The filmmakers crafted their nature footage into a kid-friendly "narrative" about the itty-bitty walrus and the little polar bear that could.

Pure farce served straight up and directed by the man who moonlights as the voice of Yoda and Miss Piggy.

The King of Kong: A Fistful of Quarters

This is a winning, sweet, and occasionally disturbing documentary about otherwise sensible adults who vie for the title of World's Best Donkey Kong Player.

Lights in the Dusk

How does one say “cherchez la femme” in Finnish?

An American actress is stranded in India in this Bollywood/Hollywood co-production.

Cera and Hill are comic gold in this comedy, which is from the Judd Apatow stable and which has credits populated with refugees from Arrested Development.

Art of the State

'Krishnam Vande Jagatgurum': Saluting the Guru to the World

When Parallelogramophonograph does improv, it's like watching hyperintelligent, human-shaped, joyously goofy otters at play

Rainbow Family of the Serendipitous Now refracts the Orpheus myth through the lens of the Manson family in a seamless, complex, color-coded vehicle

Allison Orr's choreographic tribute to Elvis Presley, The King and I, is perceptive, inventive, and surprisingly engaging

Page Two: Along the Bias

Ingmar Bergman, Michelangelo Antonioni, Federico Fellini: The great achievement of these film directors was to create living souls to look at, that we might know ourselves

The real-world Lasso of Truth, Kerouac's childhood fantasy, and more

The European season gets started, Beckham makes his MLS debut, and more