So, Who's Your Contractor?

How to find the contractor needle in the Cro-Magnon haystack

What Would Martha Do?

If the ideas are there, design it yourself!

You Don't Have to 'Do It Yourself'

When DIY doesn't cut it, hire an expert

Going green is easier than it seems

Barton Springs Pool in line for a fixer-upper

Attack of the Crickets

Texas emits more globe-warming carbon dioxide than any other state in the nation, by a long shot

Oh, the Joy of Double Dipping

The Texas Republican Party has already started pushing for electoral glory in 2008. So where are the Dems?

If it's August, it must be budget-making time at City Hall

Getting back to our Wooldridge Square roots

The life and times of a porn-music impresario

New Grounds for Leaving Iraq; and Strengthen the FDA Rockabye baby, on the treetops, when the bow breaks, the cradle will rawk!

The Underdog (demo) b/w It Took a Rumor to Make Me Wonder, Now I'm Convinced I'm Going Under, Live at CBGB, Committed to Wind b/w Stow Away, Cut the Kite String b/w Circumsize Me

All Kites Up
screens 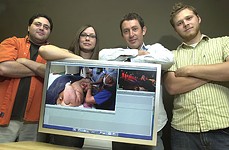 For TLC, With a Little TLC

Is a local production company that recently finished its first documentary too good to be true?

Antonioni vs. Bergman from beyond the grave

The third film in this series is the best one yet about the rogue CIA spook with the memory of a goldfish.

Bring some bratitude and a passion for fashion, and you'll be almost as giddy as a 10-year-old girl.

Jennifer Lopez and her real-life husband, Marc Anthony, portray the lives of salsa star Hector Lavoe and his wife, Puchi, in this biopic overstuffed with music-industry clichés.

Although Mahatma Gandhi was the father of his nation, he was unable to help his troubled son Harilal Gandhi.

Cross Napoleon Dynamite's endearing optimism with Ben Stiller's total commitment to his goofy characters, and you'll wind up with a character something like Andy Samberg's hapless stuntman.

Lindsay Lohan knows there are fates worse than her current legal quagmire – starring in this clunker, for example.

An antiques dealer is more at home with his silent artifacts than with his fellow Parisians, until a cabbie teaches him the basics of social interaction.

The film delivers familiar hilarity and some treats you’ll never get on the show (nudity and drunkenness) but steers shy of anything bold and new.

Cheadle leads a great cast through a musical glance at D.C. in the Sixties and Seventies.

When the time comes for an aging gangster godfather in Hong Kong to step down, a bloody battle for control ensues in this vivid story about thug life.

This Swiss film tells the story of a child prodigy torn between his parents' desires to further his career and his own need for normalcy. Allison Orr choreographs a new comeback special for the King

For its annual juried show, Gallery Lombardi asked artists to dive into the fantastical and mythical depths of the ocean

ColdTowne: Home on the strange

When it comes to the improvisers of ColdTowne, you're in for a really enjoyable time watching these guys do their stuff

Spoken-word artists on their art form, the National Poetry Slam, and one another

If you go see the Vestige Group production of Cindy Lou Johnson's Brilliant Traces, go for the performances

A Skull in Connemara

Lingo's mosaic of dance and music was accessible, unpretentious, and full of life – much like its creators
columns

Page Two: Free to Be You and Me

'Chronicle' letter-writers and the editors who love them: a field guide

8:15am, the moment Hiroshima was bombed, comes around every morning: It is something we live with

7-Eleven for the homeless and underpants for the illiterate