Tire Tracks: What the Lege did

Feeling singled out, they're threatening to sue state over legislation banning roadside hunting of wild animals

Northcross: 'It's Not a Done Deal'

Who's Paul Robbins, and what's a cooling plant?

One, two, three, four – what are we fighting for?

The plots thicken at City Hall

'The Lee Bros. Southern Cookbook: Stories and Recipes for Southerners and Would-Be Southerners'

It's Too Funky in Here

Two More on the One

NAMM's encore run at Austin, Dead Oceans floats a boatload of upcoming releases, and the Hood Internet doesn't care if vinyl singles sales are up, because their mash-ups are the singles of the 21st century 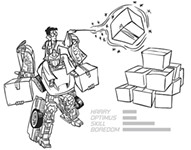 It would behoove you to read this and read it quickly

While No Reservations is no Big Night, it's surprisingly winsome in parts, by virtue of Catherine Zeta-Jones' performance, and a romantic fable that lingers on the palette of the mind's eye.

German arthouse director Werner Herzog tells the story of Navy air pilot and POW Dieter Dengler (Christian Bale) and proves that he is capable – like his characters – of almost anything.

The sci-fi reunion of Danny Boyle and Cillian Murphy (28 Days Later) is never less than beautiful but has a profoundly implausible plot turn that cheapens the sentiment.

Ten Canoes is as much a work of anthropology as it is a narrative, and its true strength lies in its exploration of ancient aboriginal hunting practices, death rituals, and legal traditions.
arts & culture

Even in blazing summer, Austin's welders and forgers fire it up and make like rock & rollers

Jan Heaton: Watercolor in her blood

Watercolor master Jan Heaton, who's been painting since she could hold a brush, explains how she makes art

Buddy Daddy: A boy and his dog

The young musical thespians of Summerstock Austin's Thoroughly Modern Millie are determined to entertain you, and they succeed impeccably

At Salvage Vanguard Theater Gallery, artists Debra Broz and Adde Russell both try to say something important, but it's difficult to make out what
columns

Ink cartridges give people the psych-out