pdf
ON THE COVER:
The New Rage
news

Flannery and Kolbert on the accelerating pace of global warming

Results from a variety of elections

Get your rear in gear

Some Central Americans catch a temporary break; and lawsuit filed against LAPD on behalf of organizers of May 1 rally in Los Angeles

Although Yellow Bike boasts more volunteers, community-benefiting programs, and grassroots momentum than ever, a cloud of uncertainty looms over group's East 51st shop, set for demolition by early 2008

On the Lege: Freshman Watson Thrives in Senate Environment

Lege is preferable to City Hall for former mayor

Two years after Lege passed sweeping reorganization of competitive landscape for delivering telecommunication services to homes, community groups wonder what happened to committee that was supposed to monitor law's impact

Before your eyes glaze over, a few matters for consideration

Who's joining Bush's war?; and Why import so much food?

Top Chef (and Taqueria and Takeout and Place to Take Kids and ...)

Freescale's Road to Austin is paved with good intentions, Lions get ready to roar on Guitar Hero 3, the Parish thinks locally, and the Texas Music Museum's barely-tapped treasure trove

The Boy With No Name

Crazy Ex-Girlfriend, Balls, One of the Boys, The Best Damn Thing
screens

Boots and Suits, Scheming and Dreaming

The Wilson Brothers on The Wendell Baker Story

The filmmakers, cast, and crew of Chalk learned valuable lessons with little in the way of a plan or a budget

Not Going to Use 'Time Warp' in the Headline ... Oops, Too Late

Charles Burnett on Killer of Sheep

Based on a short story by Alice Munro and confidently directed by actress-turned-director Sarah Polley, this drama starring the stunning-as-ever Julie Christie is a penetrating story about love's mysteries.

Made by teachers for teachers, this local indie offers no easy answers to its statistic that 50% of teachers quit within their first three years on the job.

In this multination offender, Larry the Cable Guy and two friends are Army reservists who are shipped off to Iraq but mistakenly wind up in Mexico – and can't tell the difference.

Zach Braff and Amanda Peet play husband and wife who deal with a new child and an old flame in this featherweight comedy that never steps outside its comfort zone.

The lunatic charm of Parker Posey is the best reason to see this wild, borderline-screwball sequel to Hal Hartley's 1998 film, Henry Fool.

Grbavica: The Land of My Dreams

This first feature from Bosnian director/writer Jasmila Zbanic offers up a slice of life after hell in which a widowed mother and daughter still veer perilously between fear and hope.

Journey From the Fall

The fall of the title refers to the fall of Saigon – which is just the beginning for these Vietnamese characters whose stories of re-education camps, exile, and relocation are movingly portrayed in this drama.

The big, green cash machine has finally run dry, perhaps not of box-office power but most assuredly of the caustic wit that made the first two films so winning.

This flat French farce has a couple of likable characters, one or two decent jokes, and a lot of missed opportunities.

The Wilson brothers deliver this shaggy comedy – which was written and directed by Luke and Andrew and co-stars Luke, Owen, and seasoned pros Harry Dean Stanton, Seymour Casssell, and Kris Kristofferson.
arts & culture 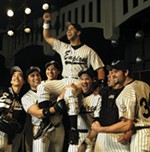 As he prepares to leave Austin, internationally recognized artist and former Arts Commission Chairman Mel Ziegler reflects on the city and the arts over the past decade

Fandango!: Double the plucking, as guitar and harpsichord wed

It may seem a strange marriage, a union between guitar and harpsichord, but when harpsichordist Keith Womer and guitarist Susan McDonald play together, all doubts fade away

Ballet Austin's Dance Education Center gets some financial help to the finish line, and UT's Ransom Center gets an extra helping of Samuel Beckett materials

In staging Wallace Shawn's famously unproduced and pornographic A Thought in Three Parts, it'd be so easy to stumble or misjudge, but Rubber Repertory has gotten almost everything stunningly right

Smelling the jasmine with Vince Martin and Fred Neil