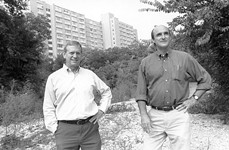 No Concord for Northcross?

RG4N directs its ire at the city manager's office

After the (SXSW) Party: Where's the Fire?

AMD Not So Clean?

Plainview Estates to Finally Get Water

City Gets Street-Smart About Bikes

On the Lege: Itty Bitty Steps

Minority Dems savor a few budget victories, and other news from the Capitol Opened in the waning hours of 2006, it's housed in the site formerly occupied by the restaurant 7. And Lamberts. And Liberty Pie.

Born of a few dirty-water carts at Second and Congress, it now boasts three locations
music 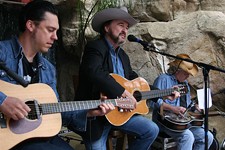 Amber Current Flowing From My Mind

Kashmere Gardens Mud: A Tribute to Houston's Country Soul and Texas on a Saturday Night

From the Cradle to the Grave

Greatest Hits, Heartaches by the Number, Poppin' Johnny, This Side of the Big River

A Cold Cup of Poison

The Cinema of Possibilities

Low budget or big, the energy and imagination of the grind-house circuit is reborn in Robert Rodriguez and Quentin Tarantino's tribute

The Mirror of Soul: The Forough Farrokhzad Trilogy and Steven Wright: When the Leaves Blow Away

Grindhouse, which was filmed in Austin, raises the bar for movie showmanship and the theatregoing experience.

Playing the con artist Clifford Irving, who notoriously forged the autobiography of Howard Hughes, Richard Gere has one of the best roles of his career.

While Disney’s latest animated feature might not be a sign of the apocalypse, it’s at least a sign that Disney needs to find some decent writers.

This historical sword-and-sandals epic is set in 18th century Kazakhstan.

A lesbian on the rebound falls for both a guy and a gal in this rom-com with roots in old Hollywood screwball comedies.

Pardon the pun, but audiences will reap little from this satanic backwoods juju thriller.
arts & culture 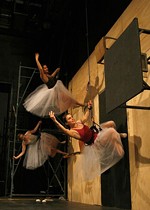 The Laboratory of Playmaking

A Guide to the Works

The Playing of the Shrew

Ruth Denney, one of the most influential arts educators that Texas ever knew, died March 26, little more than a week before her 93rd birthday

The 2007 Texas Biennial exhibition at Site 1808 boasts strong outdoor artwork, but the use of PODS didn't quite realize its potential
columns

Page Two: The Heroic and the Holy

The beautiful and peaceful Our Lady of Lourdes Grotto in Rio Grande City is steeped in history, religious and otherwise

Tax return – can I get an extension?