pdf
ON THE COVER:
They Hear America Singing!
news 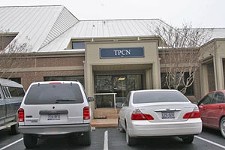 In the name of "promoting childbirth," the state finds yet another way to deny health care to thousands of Texas women

Abortion Alternatives, by the Numbers

TPCN: Ask Us No Questions

Texas' "abortion alternative" has roots in the Keystone State

Innocence Commission Back in Lege

No End in Sight for Hurricane-Housing Limbo

Point Austin: Compared to What?

Crisis at Kealing the latest chapter in a too-long story

What Hath George Wrought in Iraq?; and Cheating on Oil Royalties 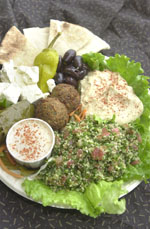 Local artisan food producers should have a big 2007

I have previously praised sushi that, in retrospect, was merely acceptable. My standards have been redefined.

About four years ago, Mehdi and Farah Meschi were persuaded by friends and family to move to Austin, and they opened Shandeez Grill last year.
music Ted Nugent livens up Rick Perry's inaugural ball, the literary side of the Texas Rollergirls, more parking needed on the Eastside, and a redheaded stranger comes to Coachella

Run Out of Darkness Eric Steel on The Bridge

Four for the Weekend

For once, Ellen Pompeo is spared Belinda Acosta's wrath while she goes after ... America Ferrera?

Though it was mostly noted for its cult performers and scenester ambience, the film's Criterion edition positions it firmly amid the commercial groundswell of independent cinema

A sure winner for arthouse audiences with crossover appeal, Fabián Bielinsky's The Aura spins a purely enjoyable web of intrigue within a meditative, dreamlike setting.

An archetypal date movie with a good heart, Catch and Release is the lightweight story of a widow (Jennifer Garner) who discovers that you never really know a person.

This remake of Robert Harmon's original 1986 horror semiclassic serves as a primer in how not to generate suspense.

Salaam-e-Ishq: A Tribute to Love

A morality play without the morality, Seraphim Falls demands its protagonists (Pierce Brosnan, Liam Neeson, Anjelica Huston) resign themselves to their loneliness and brutality.

A person could have a reasonably good time with this confusing, Tarantinoid actioner starring Ben Affleck, Jason Bateman, Jeremy Piven, and Alicia Keys, but there’s not actually much tension in the movie.

Peter O'Toole, in an Oscar-caliber and -nominated performance, pulls off the tricky May-December relationship at the heart of Venus with colossal panache and sublime craft.
arts & culture 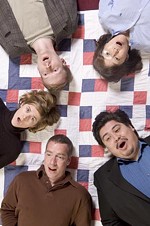 Crossing the Divide: The concerts

Cheryl Bentyne, the willowy soprano of the Manhattan Transfer who also has a solo career, talks about the difference between singing with a group and singing alone

The novel dose of the now offered by the FronteraFest Short Fringe was on view Jan. 19, notably in "Bliss," a verse drama of dangerous beauty, and David Hendler's poems of Jewish identity

Austin Lyric Opera's American premiere of Waiting for the Barbarians speaks powerfully to life in a time of terror and oppression, sounding a wake-up call to our humanity 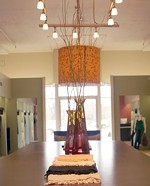 The Sabbath-Jethro connection, and the drunkest city in America

Options when injured in an auto accident