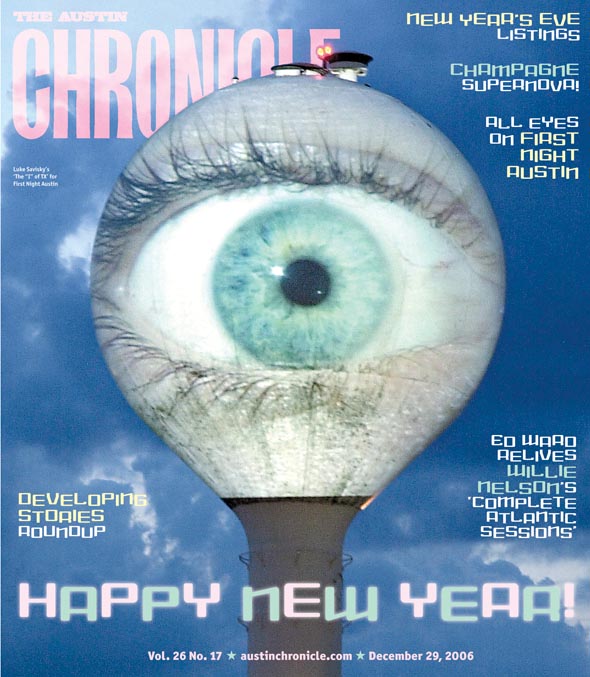 pdf
ON THE COVER:
All Eyes on First Night
news 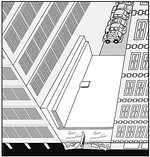 Developing Stories: Where Are They Now?

The latest on this year's big digs

Lawyers for Graves fire back at Burleson Co. District Judge Reva Towslee-Corbett, who, in an apparent screw you to federal bench, set $1 million bond for Graves to be released from jail

Judge gives Craddick until Jan. 12 to provide information to court to determine whether his private calendar contains details about public business that would warrant its release under open-records laws

Prissy Politicos; and My Gift for George W. 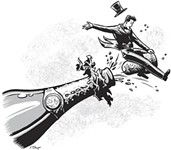 Shopping for the Celebration

Will Travel for Food and Drink

Austria, Poland, and the Czech Republic

Why Whip In Rules

Sorry, Travis Heights: your secret's out 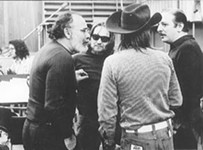 Closet Freak: The Best of Cee-Lo Green the Soul Machine

Up from the Catacombs: The Best of Jane's Addiction

The Worst of Jefferson Airplane

The Best of Depeche Mode Vol. 1

Don't You Know Who I Think I Was? The Best of the Replacements

21 No. 1 Hits: The Ultimate Collection

Reasons Why: The Very Best Of
screens 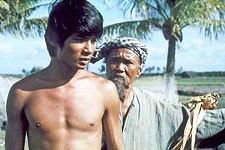 Champion of the World Cinema

TV to the rescue, 'Madman' Robert Rodriguez, and more news

The overs and the unders

Although this horror remake isn't as suspenseful or emotionally draining as its influential 1974 predecessor, the film almost makes up for that with its overriding weirdness.

The Cave of the Yellow Dog

Shot on location in Mongolia with a real nomad family, The Cave of the Yellow Dog blurs the line between documentary and fiction and, in doing so, creates its own singular dramatic language.

Set in China and starring Naomi Watts, Edward Norton, and Liev Schreiber, this melodic adaptation of W. Somerset Maugham's novel is the story of many things – but it is most of all the story of a marriage.

The Piano Tuner of Earthquakes

Like a dream, the Quay Brothers' The Piano Tuner of Earthquakes is wispy and ethereal; like a nightmare, it lodges in your hindbrain and gnaws away with gleeful abandon.
arts & culture 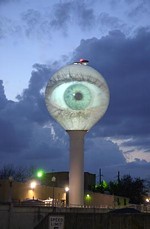 All Eyes on First Night

Austin Theatre: What will be will be

Austin Lyric Opera Artistic Director Richard Buckley and Managing Director Tamara Hale are both leaving their posts in June 2007, after which ALO will return to a single general director running the show

Rollin' on the 'River'

NEA grants in the stockings of three Austin arts groups, plus the Rude Mechs get their Big Apple on at the Public Theater's Under the Radar festival

The overall effect of "The Downtown Show: The New York Art Scene, 1974-1984" is almost patriotic, showing an appreciation of the radical thought and freedom of action that made the U.S. the young revolutionary in that time

"Abstract Expressionism, 1940s-1960s" is at once a stand-alone illustration of a pivotal time in American art and a prelude to the continued explosions of radical artistic energy that marked New York throughout the 20th century
columns

In the current political climate, reasoned debate turns too easily to ideological hate 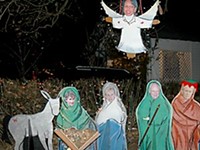 Throw down after throw down, 2006 was one biiiig par-tay for your Style Avatar

Don't mess with Texas, unless it comes to per capita spending on parks, where we are ranked 49th in the country

It's about time for the end of time

Late delivery on holiday present – do I still have to pay?