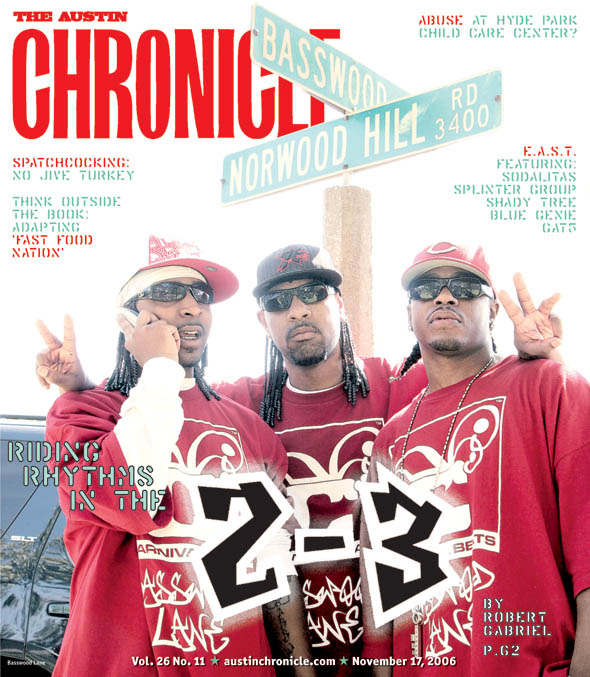 pdf
ON THE COVER:
Life Is a Rhythm
news

When the Bough Breaks

In 1993, the Hyde Park Baptist Child Development Center hired a teacher who proved to be a little 'rough' with the children. Now the church is being sued for ignoring alleged child abuse.

Election 2006: All Their Base Are Belong to Us

Crunching the numbers on the November 2006 election

More of the dirty same in the southern Mexican state, where striking teachers, indigenous groups, students, and leftists have been trying to oust Gov. Ulises Ruiz from power for about the past six months

Staying the Course in Huntsville

With the execution of death row inmate Willie Marcel Shannon, Texas earns the dubious distinction of having executed the 1,055th prisoner in U.S. since death penalty's 1976 reinstatement

Whatever their number, the Iraqi casualties lie at our feet

A light council agenda for this week, focusing on Downtown and salamanders

The War Tally; and State Secrets

So, You're Done Spatchcocking ...

Now, what about your Thanksgiving sides? The Food writers share their recipes.

Around town, with an appetite

Get thee to a winery!

Life Is a Rhythm

Sittin' sideways at the Recording Academy Honors, pondering the state of the music business with Chronicle photographer Andrew Shapter, mourning a death on the Eastside, and applying America's newfound Democratic spirit to our Rock & Roll Hall of Fame ballot

The House of Apples and Eyeballs

Think Outside the Book

on 'The Life and Death of Peoples Temple'

Light From the East

I've got some good news and some bad news. Which do you want first?

The first of three collaborations between Carol Reed and Graham Greene

This is the James Bond origin story wherein we get to discover, along with incoming blond Bond Daniel Craig, where 007 got his suave daredeviltry and love of fast cars, vodka martinis, and highest-stakes cardsharpery.

A born-again high school football coach draws on a higher power to inspire his team to victory.

Richard Linklater and Eric Schlosser's noble and worthy film about meat processing and consumption smacks of good-guy agitprop and fails as a character-driven narrative.

Raise your flippers in praise of these animated yet flightless fowl, who sing and dance and fight the eco-wars.

A gritty drama about a disappointed military vet and his best pal, who are headed in a downward spiral in South Central Los Angeles.

Sarah Michelle Gellar plays a woman who keeps seeing a dead murder victim in her dreams, so of course she must get to the bottom of this mystery.

Shut Up and Sing

The Dixie Chicks' struggle with the conflicting demands of art and commerce as portrayed in this documentary shows that they're still not ready to make nice.
arts & culture 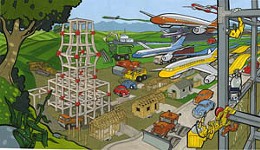 Demetri Martin, of the "Trendspotting" segment on The Daily Show, explains his quick rise in comedy, how it feels to be semifamous, and why he chose Austin for filming his next Comedy Central special

A big gift for Austin Lyric Opera, national honors for two of Austin's young classical musicians, and TexARTS sails up a Big River in January

The real Flags of Our Fathers rests in Harlingen

Resveratrol, found in red wine, has many beneficial effects on a person's health

Idi Amin's musical aspirations and the death of cursive

A huge week for Texas soccer!