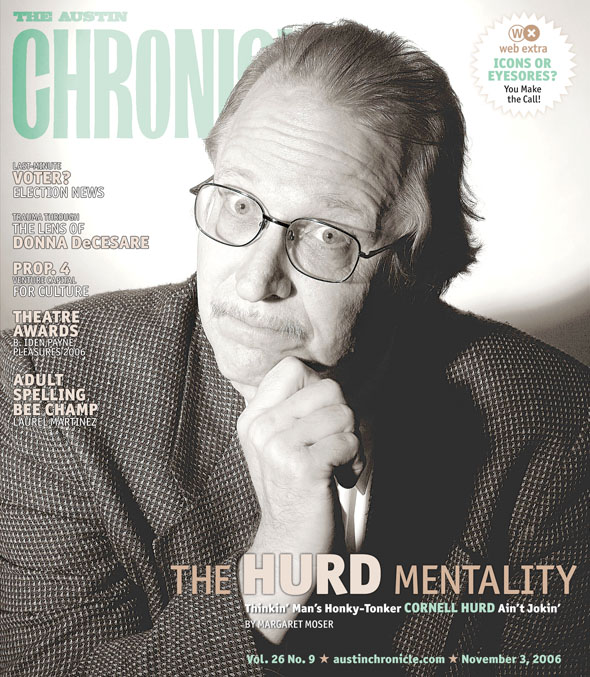 pdf
ON THE COVER:
Hurd Is the Word
news The documentary photos of Donna DeCesare

One last stop on the campaign trail before Election Day

Top 8 Reasons to Vote for a New Main Library

A look at the proposed Iconic Preservation ordinance - a brilliant idea, or a nutty one?

You make the call!

Police Monitor: What Brown can do

The process is supposedly still open, but Travis Co. prosecutor Cliff Brown looks like a lock for the Police Monitor job

Comptroller releases report charging that agreement between Accenture and Health and Human Services Commission was crafted to benefit Accenture's bottom line, and that the company has already profited despite series of missteps

Capital Metro unveiled its streetcar circulator route for Downtown and Mueller at its recent board meeting, but the agency still managed to see that announcement upstaged by a proposal to double current bus fares and a likely impending labor squabble.

Point Austin: One for the Books

All the sound and fury is upballot, but the real work is on the ground

As the bond election nears, council takes up a light agenda

In Austin, it's a small world after all, but one with plenty of options

Curry in a Hurry Hurd Is the Word

Cornell Hurd, Austin's most prolific C&W songwriter? It's no joke.

I Killed the Monster: 21 Artists Performing the Songs of Daniel Johnston

... Thanks for the Words

Ranch Is the New French When the Family Business Is the Oldest Profession in the World

At the Alamo Downtown: Two Star Symphony does 'The Cabinet of Dr. Caligari'

This mockumentary provides some of the most fearless acts of transgressive comedy in years.

Flushed Away has a wicked, smart, and subtle sense of humor, and unlike so many kids movies these days, its characters are living, breathing parts of a small ecosystem.

Old Joy is an accurately observed slice of that moment between postadolescence and parenthood, when friends cling or scatter, and circumstances force buried feelings to the fore.

The director of Saw II is back for more of this vicious-minded series in which the psychopathic Jigsaw toys with his victims' last gasps.

This first feature by Georgian-born French immigrant, Gela Babluani, marks a memorable debut: It's a taut and stylish thriller despite its brutal psychological duress.

Bollywood film about the emotional journey of a young girl who is kidnapped and sold as a courtesan.
arts & culture

Proposition 4 calls for an investment in cultural facilities for the city, and, Austin, it's time

Where the Money Goes

Disney's made-for-cable phenomenon High School Musical is jumping from the small screen to the stage, and Austin High is one of seven schools chosen to premiere the official stage adaptation

When the Austin Circle of Theaters handed out its B. Iden Payne Awards for 2005-2006, it was 'American Fiesta' that, well, bowled over the rest of the nominees

For folks working on First Night Austin, eight weeks out is crunch time for the mammoth cultural extravaganza, especially since they want the second edition to be even better than the first

'The Assumption' is Refraction Arts Project's very modern and entertaining take on 'Hamlet' – a Shakespearean satire of all things hillbilly and all things Eastern, set to a rock & roll beat

Ring Rip Rent, a new play by Martha Lynn Coon, shows us a future where women who have violated society's sexual mores are confined, classified, and treated

Page Two: The Time of the Toad

The New McCarthyism, or why the way the Dixie Chicks incident passes into history matters 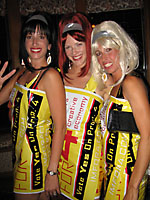 Stephen goes off on Fudgems and gets a li'l on himself...

The lowdown on amyloidosis

Filing complaint against a doctor

Visiting the Mt. Blanco Museum is a must for all dinosaur lovers

Howdy Doody's double and when to spank a monkey

An MLS playoff update, and more