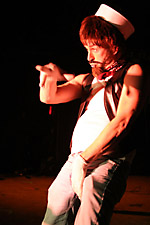 All Over the Map

The many moods of International Drag KingCommunity Extravaganza 8

How to magically appear on Nov. 7

The Rise of the Invisible Man

Can longshot Democrat Chris Bell ring up a miracle?

Chris Bell knew the TV debate was his one shot, so he tried to hit it out of the park

The Other Guy: James Werner

This year, four of the court's six seats are contested

Big Box, Back Off!; Las Manitas Swirls On; and Bucking the City

A Letter to Mexico

As his defense attorney worked on a last appeal of his case, 29-year-old Michael Johnson, who was set to become the 376th prisoner executed in Texas since 1976, took a makeshift knife and slashed his own throat

Many a surprise lurks this time of year within the walls of old Travis Co. jail

Bob Watada, father of Lt. Ehren Watada – who refused to go to Iraq and who has publicly denounced the war repeatedly – comes to Austin as part of national speaking tour

From Managua to Guang Zhou, it ain't easy being Wal-Mart

Books at Green, Drunks on Sixth

'Hemp for Farming' and Acronym Antics

Foodies, follow us to paradise, aka the TBF Cooking Tent ...

Dishes From the Wild Horse Desert

The Scavenger's Guide to Haute Cuisine

Deep South Parties OR How to Survive the Southern Cocktail Hour without a Box of French Onion Soup Mix, a Block of Processed Cheese, or a Cocktail Weenie

The Kitchen Table: Brennan's of Houston

The United States of Arugula: How We Became a Gourmet Nation

Jay McInerney's 'Hedonist in the Cellar'

A novelist's take on wine

Getting a read on Halloween 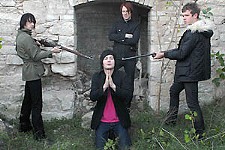 Halloween tricks and treats from the Rolling Stones, Pet Shop Boys, White Ghost Shivers, and Palm School Choir, while yet another Austin outdoor festival is born

If We Can't Escape My Pretty

The Song He Was Listening to When He Died

The Parazite, The Call Me No, Welcome to tha Ground Under, Day of Truth

The Game Is All

We catch up with some major players in Austin's gaming universe

Say hello to my big (and black) friend

Released in 1985 to a chorus of religious condemnation and social opprobrium, it's Jean-Luc Godard's most divisive film, which is saying something

Phillip Noyce explores the havoc and repercussions caused by white interlopers toward indigenous peoples in this straightforward account of real-life black South African activist Patrick Chamusso and the white Boer police agent, who hunts him.

Life-affirming lessons about a generous, forgiving God and the redemptive possibilities of love and charity dominate this movie based on Neale Donald Walsch's bestseller.

Death of a President

More sleight of hand than persuasive drama, this what-if story about the aftermath of a presidential assassination is technically seamless but dramatically hollow.

Girls and their horses. They're grist for this new update of Mary O'Hara's beloved novel My Friend Flicka.

A Guide to Recognizing Your Saints

Montiel's debut feature about growing up in Astoria, Queens, in the mid-Eighties is full of the filmmaker's instinctive brio and inchoate ideas and the elaborations of a brilliant ensemble cast.

This film captures a fair amount of this band's electric charge and documents its 2004 reunion tour.

Writer/director/actor Bujalski has been branded the “emo Cassavetes”: His movies have an astoundingly lifelike rhythm full of small moments that only add up to something bigger later on.

Two rival magicians are locked in a lifelong quest for supremacy, which leads them down a slippery slope of hairpin twists and triple-turns in this Christopher Nolan movie.

This Helen Mirren starrer provides a glimpse of the British monarchy at a contemporary crossroads between supreme dominance and utter irrelevancy.

Not reviewed at press time. Science fiction, film noir, and revolutionary animation combine in this futuristic story set in Paris 2054.

This film depiction of Augusten Burroughs' hellish childhood is tonally fractured and features a series of performances that pitch and yaw between "normal" and utterly mad.

Satan causes Earthbound heathens to believe that the sudden depopulation of the planet is due to an extraterrestrial invasion rather than the Rapture. Holy UFOs!
arts & culture 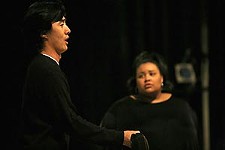 'The Fall of the House of Usher': When Debussy was a Poe boy

With UT's hosting of the Debussy International Congress comes a Halloween treat: an operatic adaptation based on Edgar Allan Poe's 'The Fall of the House of Usher'

You can count all the comedy venues in Austin on the fingers of one hand, so the opening of a new one, ColdTowne Theater, qualifies as a real occasion

With a new wave of interest in ventriloquism, what better time for full-time Austin puppeteer Bob Abdou to launch a course in Ventriloquism 101?

The End of Words: An Evening With Eugène Ionesco

Coda Theater Project's staging of three one-acts by Eugène Ionesco suffers from its attempts to inject emotion and motivation into absurdist texts, but the plays themselves are still eminently entertaining

Joey Fauerso's 'Wide Open Wide' is a stellar animation that sets hundreds of her paintings in motion, but the display of those paintings at Women & Their Work makes for a less than compelling installation

All seven propositions on the current ballot represent a triumph of thought, vision, and planning

Republican stewardship of our government has miserably failed. Polls show that Americans finally realize this, but we don't know if that will translate into votes.

The fall social calendar is in full swing, and your swinging Style Avatar is all over it

Did you know that wild foods have more nutrients than domesticated plants or animals?

How do I file a grievance against an attorney?

Wanna see some ghosts? Galveston is the town for you.

An MLS playoff update, and more