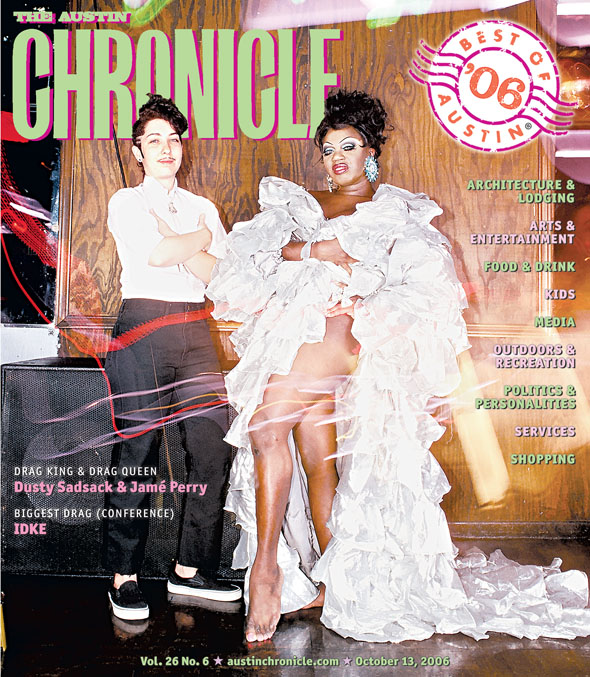 pdf
ON THE COVER:
Best of Austin 2006
features

Sparks says businesses are not responsible for smoking patrons' conduct

Tidbits from the trail

Energy Efficiency One Way or Another

Wanted: new rules to ensure funding is available year-round for consumers seeking to lower their electricity use

While Iraq burns, official Washington wallows in the Foley scandal

The downtown plan moves forward, but the direction is a little uncertain

The Ungodly Pensions of CEOs; and Drinking Liberally

Employee of the Month

Assorted workers vie for the coveted title of "Employee of the Month."

It's another Truman Capote picture about how the author wrote In Cold Blood – and it stands solidly on its own merits.

The Last King of Scotland

Forest Whitaker becomes dictator Idi Amin in a ferocious performance that often dwarfs the more ordinary aspects of this picture.

Riding Alone for Thousands of Miles

Chinese film by veteran Zhang Yimou is a tale about good intentions and missed opportunities.

The Texas Chainsaw Massacre: The Beginning

In this prequel to the original Chainsaw, we learn how Leatherface grew up to become a monster.

A hard-boiled detective investigates a murder at a Buddhist monastery.
arts & culture

The title of Monika Bustamante's 'Stillborn' is no pun but a promise of what is to come: two hours of anger, rape, murder, and stillbirth that is upsetting, dark, and, unfortunately, not illuminating

We Are Normal, Cha Cha Chaaa

The dance 'We Are Normal, Cha Cha Chaaa' is such a whirl of motion, bursting with youthful exhilaration, that it suggests nothing so much as five girls hard at play on a long summer's day

The pieces in 'Daniel Bozhkov: Recent Works' grab our eye with comic incongruities, but behind the visual joke is a story of how everything in our world is connected
columns

On onion rings, barbecue, and the never-ending "Best of Austin" debate

On September 28, key rights guaranteed by our Constitution, plus the central tenet of the Magna Carta, were nullified by an act of Congress – specifically, the Military Commissions Act of 2006

Statin drugs reduce serum cholesterol levels, but there is intense controversy over whether this translates into a reduction in deaths from heart attacks

My Neighbor's Dog Won't Stop Barking – What Can I Do?

Royal tattoos, and the award for tallest actor goes to ...

Luv Doc Recommends: The Sinus Show: Snakes on a Plane