pdf
ON THE COVER:
Let Me Show You Something You May Have Missed
news

One year later, Rita's invisible evacuees still wait in the shadow of Katrina

Ann and Bob: What happened?

Past 'Chronicle' Coverage of Richards

Report: Arrests Up, Use of Force Down

While there was an overall increase in arrests made by Austin Police last year, the overall rate of police use of force declined, according to a recent APD report

Small, local effort to call attention to discrimination against gays in military recruiting under way with sit-in

Combination of reduced supply, lower than average rainfall in watersheds, and increased demand has caused both flow at Barton Springs and measured water levels to fall below critical indicators for first time in Edwards Aquifer Conservation District’s 19-year history

One Doc's Medicine: Serve God, save the planet

Dr. J. Matthew Sleeth believes he has the metaphysical medicine to heal the largely disjointed relationship between the country's environmental and religious communities.

Ann Richards was as contradictory as life in Texas 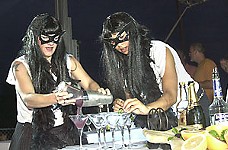 The official drink of Austin contest

Come and get it!

An ambitious menu, and it all works

Reviews and photos from all three days

Fantastic Fest II is for real

Friday-Sunday, as part of Cinematexas 11

Ninja-pirate-supermodels, the Austin Polish Film Festival, and zombies (of course)

Not all is well in the City, but it's good to be back

Chong cuts a hugely sympathetic figure in the story of his legal troubles after Operation Pipe Dreams, an anti-paraphernalia sweep that specifically targeted his bong business.

Despite an A-list cast and director, it's astonishing how bad this movie is.

Even if it's not quite an affair to remember all year, this BBC Films mockumentary about three wacky weddings is pleasant and enjoyably diverting.

Everyone's Hero displays its heart firmly on its sleeve as the pedestrian animation celebrates the pursuit of one's dreams.

Strange as it may be to say, Jackass: Number Two is just the kind of vicarious excitement for which the movies were invented.

The Science of Sleep

Michel Gondry's film is messy, confusing, painful, and ultimately, thanks in no small measure to the unfettered talents of Gael García Bernal and Charlotte Gainsbourg, utterly rewarding.

Everyone complains about the perceived shortcomings of the MPAA, Hollywood's movie-ratings board, but nobody does anything. Nobody, that is, until activist documentarian Kirby Dick.

This oddly dispassionate film about a young man dying of cancer is the French antidote to those Hollywood weepies in which the heroine courageously faces her own mortality with every hair in place.

As raw and disturbing as it is wry and satirical, this film gives voice to U.S. National Guard soldiers in Iraq.
arts & culture

Let Me Show You Something You May Have Missed

Pro Arts Collective gets your attention with BAM!, a new performing arts festival bringing dancers, actors, poets, and musicians to Austin to display the surge of creativity among African-American artists

The influential artwork of Micael Priest blesses the South Austin Museum of Popular Culture, and ACT wants State Theatre patrons to come to the cabaret – for free

A Moon for the Misbegotten

With his new series of collages, Austin printmaker Ken Hale trades in his flatbed press for a flatbed scanner with intriguing and sometimes luscious results

Page Two: Tearing It Up

Tearing It Up: Smart, committed, and usually the funniest person in the room, Ann Richards kicked down doors and prepared us all for the future

Your Style Avatar defines "tarantism," to which we might add, "obsequious"

Is 7-keto-DHEA any better or safer than DHEA?

No feeding the poor in Vegas, and a history of the avocado

The Lady Longhorns improve their record 6-2 and open conference play this week on the road, and more