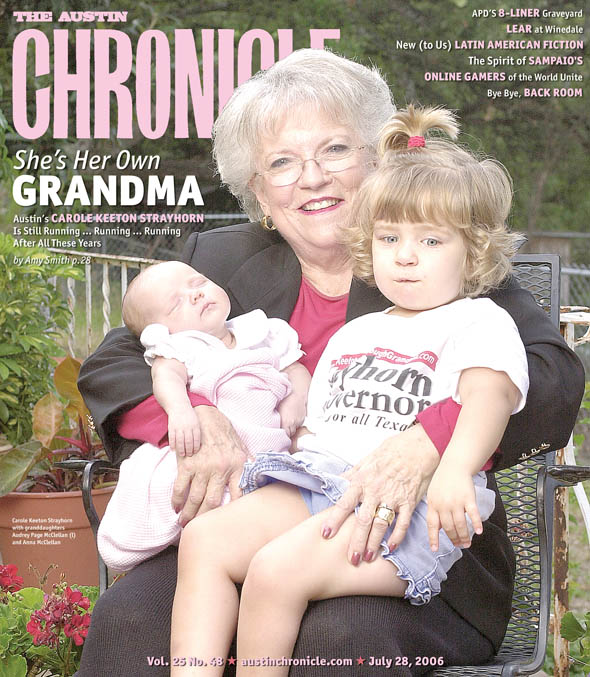 pdf
ON THE COVER:
She's Her Own Grandma
news

She's Her Own Grandma

Carole Keeton Strayhorn – what a long strange trip it's been

Is Austin being prude?

There Goes the Sun

Will a new study cause the sun to set on Austin's solar program?

With stacks of ruined gambling evidence, the city, the county, and the APD are eagerly pointing fingers

What took sheriff's office so long to release info on incident?

An Amateur's Adventures as Kitchen Slave, Line Cook, Pasta-Maker, and Apprentice to a Dante-Quoting Butcher in Tuscany

The prices might seem a little high at first glance, but the quality of the panchan more than makes up for it

Welcome to the Jungle

Jason McMaster reflects on the passing of the Back Room

Jim Ramsey reflects on the passing of the Back Room

What the Back Room leaves behind, what's ahead in the Sound Team-Pitchfork feud, and which rock superstars come calling in October

Guilds take the lonesome gamer out of seclusion ... kind of

News and rumors and just flat-out lies about local gaming

'Tempest' in a jailhouse, and its implications

Although grounded in Libertarian theory, this documentary by producer-turned-director Aaron Russo presents provocative material about the perceived illegality of income taxes – and various freedom-restricting consequences of the new world order.

Childhood's fascination with all things small and squirmy makes this story of a boy who becomes an ant a pleasant, if undernourished, tale.

Israeli film presents the region's conflict in terms of the world's most annoying, dysfunctional-family road trip, which renders the proceedings almost as exhausting as the real thing.

Perhaps vice isn't what it used to be, or maybe Crockett and Tubbs don't belong in this new time slot, but Michael Mann's movie turns out to be dreary and monochromatic.

Shakespeare's Othello is reimagined for the Indian audience in this Hindi-language film.

Woody Allen's second British film with Scarlett Johansson finds the director falling back into the rut he carved for himself with every forgettable comedy since the underrated Deconstructing Harry.

Who Killed the Electric Car?

This multifaceted documentary about the history of GM's electric car seeks the culprit responsible for its demise and finds plenty of blame to go around.
arts & culture

The 411 on Zachary Scott, how public art is made, and auditioning for the Macy's Parade

With Teatro Vivo's enjoyable revival of the bilingual comedy 'Petra's Cuento,' no matter what language the characters are speaking, it's a language you'll understand

An Arabian Midsummer Night's Dream doesn't do justice to Shakespeare's comedy, but the goodwill, visual splendor, and flashes of magic in Tongue and Groove Theatre's show can transport you halfway 'round the world

The agenda is quiet in Okay Mountain's summer group show 'Active Disappearance,' with four photographers focusing their lenses on differing subjects but all recording change
columns

Page Two: Here and There

What is 'vitamin U' and what are its benefits healthwise?

The Italian match-fixing scandal and more