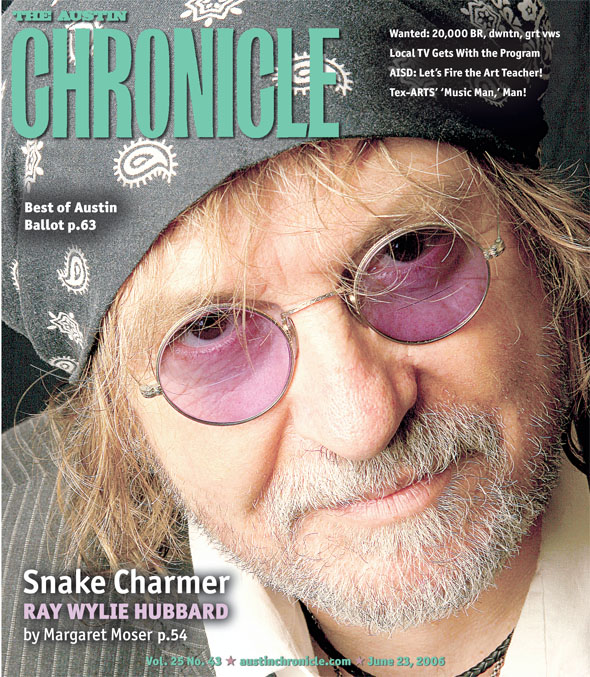 Is Williamson County dispensing with defense?

Hoover: Caught in the Flash

When you're looking for heroes, avoid the usual suspects

City Council gets ready to wade in the water (treatment plant)

Alito Strikes; and Corporatizing The Border

The latest in the Mikeska legacy lives up to the name.

Go for the booze, stay for the food.
music 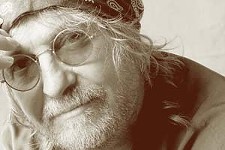 Ray Wylie Hubbard survived the crash, recovered the black box, and continues to fly high and get lowdown with 'Snake Farm.'

Alvin Patterson Battle of the Bands

Ghost of the Russian Empire

Three local channels get Austin back with the program – but is anybody watching?

Caveh Zahedi on 'I Am a Sex Addict'

In Austin and abroad: action

Click is a message movie whose real message isn't "Stop and Smell the Roses, Jackass," but "How to Manipulate the Audience in 12 E-Z Steps."

I Am a Sex Addict

If you leave the theatre with that awkward too-much-information feeling after peering into the director's self-exposed psyche, you will also remember his high-wire act that combines fact and fiction, drama and self-deprecating humor, honesty and self-delusion.

A sequel to the Bollywood fantasy blockbuster Koi Mil Gaya.

It's mostly hoo-hah, but there are moments in this New Agey, feel-semi-good crowd-pleaser that rise above and beyond the gymnastics and psychobabble.

The controversial architect is brought into focus by veteran filmmaker Sydney Pollack.

A documentary about crossword puzzles and their ardent fans, with specific focus on the daily puzzles in The New York Times; their editor, Will Shortz; and the American Crossword Puzzle Tournament.
arts & culture

But You Can Win Her Yet

The mail-art collaboration 'Hitten Switches,' by Travis Millard and Michael Sieben, is a journal, a two-person diary, an ode to friendship, and a manifestation of a respectful relationship

The waters may be gone, but the State Theatre is still sunk in the aftermath of a June 13 water-main break that left the venue's stage, basement, and four rows of seats inundated

Some Austin dance artists will be getting out of town this summer – way out of town: Innsbruck, Jacob's Pillow, and Hong Kong – thanks to special invitations

Not everything in Arts on Real's production of The 24th Day comes together as well as it might, but Tony Piccirillo's script works quite effectively on the level of human drama

'What Do You See'

In his first Austin show, Lubbock's Joe Romero presents abstract paintings that utilize a variety of colors and patterns to summon forth archaic subjects for the viewer to contemplate

The Carver Museum exhibition "Legacies of Dust" is a vital exploration, through the lens of daughterhood, of how memory functions and how selves are defined out of time, place, history, politics, sexuality, and community

The Best Little Whorehouse in Texas

There ain't nothin' like a ho'-down, and Austin Playhouse's production of The Best Little Whorehouse in Texas draws the audience to her big friendly bosom
columns

On this drive, the universe condensed into one word: invitation.

You wouldn't think that an event so oozing with testosterone would displease Stephen so. Well, you'll just have to read to find out.

What is the difference between l-glutamine and glutamine, and the same for the other amino acids?

All the World Cup news that's fit to print