pdf
ON THE COVER:
Visions Holy and Damned, Innocent and Experienced
news

Putting a Lid on Leininger

Day Without an Immigrant work stoppage and boycott draws more than a million people into the streets nationally; thousands turn out locally

Social service providers worry about the potential effects of Prop. 1

Office seekers – most of them – learn to just say 'yes'

News and notes from the municipal election beat

Officer Suspended for Excessive Use of Force

Don't Put Their Back Yard in My Back Yard

FDA says idea that marijuana has any medicinal value is hoax

Prop. 1 and Prop. 2 are not "open," not "clean" – and definitely not progressive

The future is sunny, cab drivers are stormy, and water treatment's horizon is cloudy

Who Is to Be Detained?; and Constricting High School Education

A survival guide to the raw-foods movement

Winners and losers on Food TV and more

My Gang Don't Bow Down

TCB enters the political arena with Neil Young's new album, Trail of Dead behind the Iron Curtain, and a hipster pop quiz

You in Reverse, Ten Silver Drops

At War with the Mystics

Cannibal Sea, Let's Get Out of the Country

Springtime Can Kill You 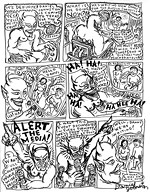 My roller-coaster relationship with Daniel Johnston

Hey, Hey, Woody Guthrie, I Made You a Film

The Icon Down the Street

Austin picks up a 'Hitcher'; Linklater's Cannes deux attitude; and the rest

'That film was taken away from me completely, and was totally destroyed in the cutting,' Orson Welles lamented. 'That was the real disaster of my life.'

The Devil and Daniel Johnston

The literal and figurative institutionalization of Austin music and art legend Daniel Johnston is analyzed from many angles in this perceptive film profile.

It's all poppycock, of course, but done with great vim, vigor, and flair.

A 16-year-old with terminal cancer just wants to have sex before dying in this sweet, if overly earnest feature.

This fantastical story from the Chinese director Chen Kaige mixes battles, magic, romance, and mistaken identities for a lovely but unsatisfying blend.

Robin Williams loads his family into a camper and goes on vacation.
arts & culture 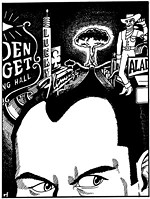 An Austin playwright discovers Sin City by going to Louisville

After 13 years of presenting theatre in other peoples' space, Salvage Vanguard Theater has acquired its own home

With its juried art exhibition 'Justice for All?:Artists Reflect on the Death Penalty,' Texas Moratorium Network gives artists a voice in the capital punishment debate

A day for free comic books, a call for new First Night Austin proposals, and a prize for fans of Sharon Bridgforth

'Triple Espresso's premise, with a performing trio reuniting and resolving old conflicts, is just an excuse for three expert entertainers to strut their stuff

In Randy Wyatt's '9x9x9,' Coda Theater Project offers a kooky thought piece on life / death and the power of God, but a lack of clarity in presentation undercuts some of the fun

'Peat Duggins: The Moment That Changed My Life Forever'

Peat Duggins' Art Palace show, 'The Moment That Changed My Life Forever,' contrasts the reactions of those in power and those immediately involved in the act of living
columns

Indecent Proposals: If you oppose these propositions, you must be on the take

Is there a concern that cooking-oil vapors could increase the chance of lung cancer?

Do I Qualify for Unemployment Benefits?

Where rock stars go to die