pdf
ON THE COVER:
Still Burnin' Down the House
news 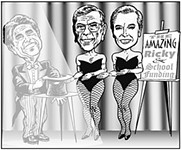 Smokers and businesses will bear the tax brunt

It took less than two hours Friday for a jury to find Manuel Cortez guilty of the murder of Woody Briseño, and another hour to sentence him to 99 years in prison

U.S. Dept. of Health and Human Services appears once again to be removing material from its Web site that doesn't agree with conservatives

Medical marijuana patient - not to mention its fiercest advocate - Angel Raich, back in federal court

Carole to the Rescue? Yeah, Right

Carole Keeton Strayhorn's campaign is floating a promise of quick cash, albeit only for the next month.

Prosecutor Owns Up to Going After Innocent Man

Mueller neighbors aren't against a new water tower, they just want a better-looking one.

A legendary restaurateur's latest venture is another success

The Arm muscles up to 'Call You Out'

A Blessing and a Curse

Child of the Seventies, His Hands, Refined Sugar, Thunderbird
screens

Everyone Their Grain of Sand

De Nadie (No One)

The Best Thief in the World

Awesome: I Fuckin' Shot That!

A Beastie Boys concert as filmed by 50 giddy fans.

Another comedy from ex-SNLers, along with Napoleon Dynamite's Jon Heder and baseball's Reggie Jackson.

With its wonderful veteran cast, its heart on its sleeve, and a love for the landscape that suffuses its technique, Sam Shepard and Wim Wenders' movie is a peculiar but rewarding escape.

Soap melodramatics masquerade as high art in this south-of-the-border drama about a love triangle and marital infidelity.

Music From the Inside Out

Documentary filmmaker Daniel Anker spent five years with the Philadelphia Orchestra as they toured, rehearsed, and waxed poetic about the purpose of music in their lives.

German film is a trite tale of youthful angst and closeted sexual confusion about what really happens at those wild and crazy rowing camps that keep all of Bavaria abuzz.

Despite its title, Disney's new animated film, The Wild, is about as pedestrian as you can get.
arts & culture

Still Burnin' Down the House

Salvage Vanguard Theater and the Rude Mechs party on

The Rude Mechs boost a resurgence with 'REVENGE!'

'The Floating Chair,' an exhibit at Design Within Reach, shows how the area's finest industrial designers bring so much to the table

Arts and the Economy

A new study shows that Austin's cultural sector contributes over $2.2 billion to the local economy and is responsible for close to 44,000 permanent jobs

The National Endowment for the Arts is giving the Zachary Scott Theatre Center $40,000 toward a production of 'Porgy and Bess' to be staged in 2007

The Blanton Museum of Art's new education and visitors pavilion has just acquired a name, thanks to a $4.5 million gift from Houston businessman Edgar A. Smith

Page Two: The Politics of Distraction

In the face of failure at home and abroad, the right turns on immigrants

Letters at 3AM: Effete!

It's never too late to see yourself as you are

We have mo bananas today

Car rentals – Do I need the extra auto insurance?

The U.S. Men tie Jamaica, will announce their WC roster on May 2, and more