pdf
ON THE COVER:
South by Southwest Interactive 06
news

Don't Bank on It

Scuttlebutt from the election trail

The Rise of McMansions

Those large-scale "starter castles" on postage-stamp plots of land bring two of the Austin City Council's most cherished ideals into direct conflict.

He Who Must Not Be Named Returns to TV News

Ron (mumble mumble) is back at the anchor desk

At the Supreme Court Wednesday, it was all about Texas and the future

New report sounds alarm that Texas parks are being financially starved, warns that many of the state's open spaces and parks are under immediate threat

AISD's vision for prekindergarten education and that of Austin's community of early childhood nonprofits differ significantly.

Some wonder if APD's Operation Out of the Box was less about clearing the streets of criminals than about cleansing them of the homeless.

Point Austin: Clean Is as Clean Does

When you signed that petition, did you get to read the fine print?

Is big-home sprawl just the facts of life?

Too many leaks or too much secrecy?; and old friends

Just across the river from downtown, the broad expanse of South Congress Avenue is the main artery of a dynamic city neighborhood and a microcosm of what we like best about Austin 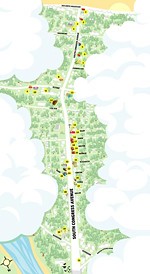 The Black Angels get their war on

Ex-Hot Club of Cowtowner fiddles as her Continental Two burn

A brief guide to SXSW panels and interviews. Plus Sigur Rós, Single Frame, or Van Morrison: Who's weirder?

From a Compound Eye

If You Didn't Laugh, You'd Cry

Ladies, what has the gaming business done for you, lately?

ScreenBurn reinvents itself for launch

The Consequences of Getting Personal

Come in From the Old

Warming up to folksonomies, recommendation systems, and glocalized environments

We asked some of the loudest, clearest, and leading voices in Cyberspace why they're coming to SXSW Interactive, what they bring to the proceedings, and who they want to encounter. Here are their responses.

Dick Rude on 'Let's Rock Again!' and the legacy of Joe Strummer

Presented by the Austin Film Society and Cine Las Americas

The Best of Youth

Based on a young adult novel by Alice Hoffman, the film is about two best girlfriends who meet up with … a mermaid!

Although the film hasn't the distinctive fingerprints of Eternal Sunshine director Michel Gondry, Chappelle's party is nevertheless a fun blast of impromptu musicmaking, filmmaking, and comedy.

A clunker if there ever was one, Doogal is so mind-numbingly incoherent that parents and children alike will stare dazedly at the movie screen wondering what the heck is going on.

In this sequel to last year’s Diary of a Mad Black Woman, Tyler Perry ups the ante and includes Cicely Tyson and Maya Angelou in his coffee klatch.

Russia's highest box-office grosser (until the release of its sequel) is a stylish sci-fi thriller that's filled with adrenaline-fueled pacing, an abundance of gory effects, a death metal soundtrack, and a convoluted narrative that puts The Matrix to shame.

Wayne Kramer's follow-up to his crime drama The Cooler has no moral compass, and swings wildly out of control while blanketed in hyper-violent digital gore effects and a thick, black nausea of the soul.

Richard Donner still has it. 16 Blocks may be a formulaic good-cops/bad-cops actioner, but it’s rarely stereotypical.

A drama by debut filmmaker Michael Meredith is a Chekhov-inspired collection of semi-intertwined vignettes about a half-dozen or so depressed people living in Cleveland, and features an impressive cast.
arts & culture

Idea Man for the Future

Ian Cion is out to build a better world, through public art

Before revving up the jackhammers to renovate its downtown dance center, Ballet Austin is inviting the public to go Dancin' in the District

Neil LaBute's 'The Shape of Things,' staged by a chick and a dude productions, destroys the kind of cutesy relationships usually reserved for melodramatic chick flicks

At Conspirare's concert Wondrous Journey, the sheer pleasure that this choral ensemble's members take in singing shone through even more resplendently than usual
columns

When we say, "This is Nature, and this is not," we're just picking and choosing according to our ideologies, desires, and needs – in other words, a power play to make life behave as we wish. That it never does is life's answer to our machinations.

Blessed Mary's in Groom: home to the righteous cheeseburger

The cause and treatment of Restless Leg Syndrome

Law can be cool – Attend 'Explore UT' at the Law School

The MGM Grand is indeed grand, and cancer-sniffing dogs