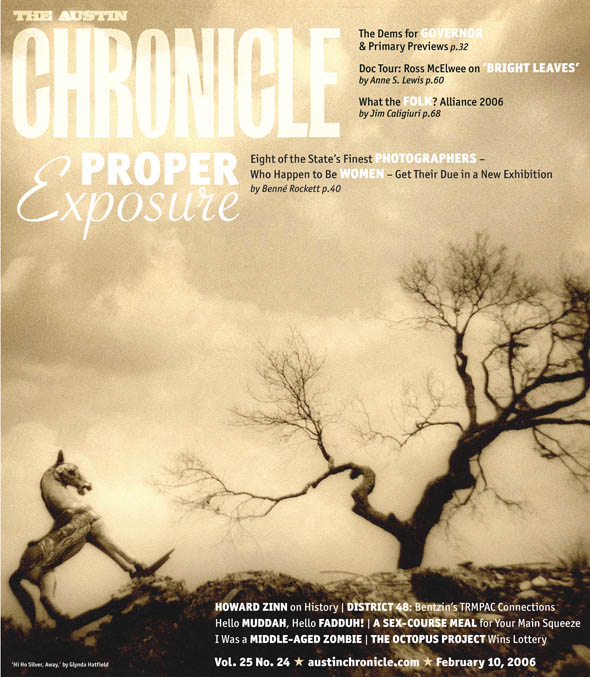 Who Are These Guys?

Bell and Gammage on the Issues

The Primary Colors: Part I

Instead of all students – current and future – convicted of any drug-related crime at any point in their lives losing federal financial aid, now, only students currently in school will lose their money if convicted on a drug charge

In his first decision as the Supreme Court's newest associate justice, Samuel Alito split with the court's most conservative members, voting to uphold a stay of execution for a condemned Missouri inmate

Point Austin: It's That Time Again

If you haven't voted, aren't voting, aren't ready to vote – wake up!

Bush's IRS goes after poor folks; and the latest 'creep' of advertising 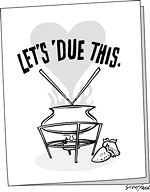 No reservations? No problem! A sex – er, six – -course meal you can make for your main squeeze

After 15 years, David Garrido departs Jeffrey's, and the timing's right for Alma Alcocer-Thomas to take over; plus, more food and wine options on Valentine's Day.

The 2006 Folk Alliance washes ashore in Austin – brace the bulkheads!

Events open to the public

Burning down the house, good for Spoon, not so good for KOOP

The Sweet Soul Light, Right Where I Belong, Shelly Knight & the Livin' Dead, The Moon, Songs of Goodbye 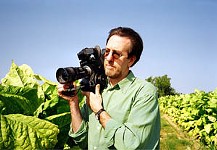 On the set of 'Z: The Zombie Musical'

Scott Rudin's Texas bent brings Kimberly Peirce's 'Stop-Loss,' even though it's 'No Country for Old Men' and 'There Will Be Blood'

They should be doing it this way

Reacquaint yourself with one Paul Walker, the Jean-Paul Belmondo of the New Preposterousness

The Hallmark homilies are all there in this family-friendly feature about a cancer-stricken 10-year-old searching for the elusive morpho butterfly, but when the principals arrive in rainforest country, the film shifts gears and begins to breathe.

Where else can you see Iggy Pop & the Stooges back to back with Morrissey, Siouxsie & the Banshees, Belle & Sebastian, Bright Eyes, and Nine Inch Nails? Nowhere but in this rambling, celebratory documentary, which covers performances from all six years of the Coachella Music and Arts Festival and manages to catch the laid-back, slow-fi charm of the actual event.

It’s not perfect, but this big-screen debut of H.A. Rey’s lovable monkey is faithful to George’s gentle spirit while fully exploiting the possibilities of old-school, two-dimensional animation.

It’s not going to nab any golden statuettes, mind you, but this shocker takes such exuberant, gleeful delight in the unspeakably gory dispatch of assorted teenagers that it may well be the most fun you’ll have at the movies all week.

A traditional romantic comedy with a lesbian twist, Imagine Me and You has its charms, but for a movie about loving radically, it sure plays it safe.

In this pointless rehash of the 1964 Blake Edwards film that introduced Inspector Clouseau to the world, Steve Martin inhabits the role of the bumbling French detective without a trace of the comic genius of Peter Sellers.

Documentary filmmaker Marc Levin investigates the reasons for the recent renaissance of American anti-Semitism; sadly, the end result is scattershot and never really elucidates or poses solutions to the problem.

When a Stranger Calls

Simon West’s do-over of Fred Walton’s 1979 creepfest – in which babysitter Belle menaced by a stranger with a phone who probably isn’t that guy from Verizon – is a hollow, shallow, and just plain boring exercise in snooziness.
arts & culture

The Jewish Community Association of Austin's production of 'Hello Muddah, Hello Fadduh!,' a revue of Allan Sherman's parody songs, may tickle your funny bone – especially the part connected to your nostalgia bone

Help the ColdTowne Heroes get out of town (to hit a batch of comedy fests around the country) at Fun-Razor, an evening of improv, sketches, and films

Allison Orr, who's expecting her first child in late March, has organized a program of contemporary dance by a half-dozen moms and moms-to-be

'Urinetown: The Musical' may wallow in a sordid premise and have an awful title, but Zach's production is always making you happy, if not downright giddy

Scale is the theme in "Grid," where every artwork is on the same scale:4 feet by 8 feet, and the show is worth the visit
columns

Well Riverside and Congress is finally all clear. So now Stephen can go out and be fabulous at all these incredible Valentine's and early springtime happenin's!

Items sold door-to-door – can I cancel my order?

The Sweet Tooth Tour of Mount Pleasant doesn't cover a lot of ground, but it does offer a variety of locally made desserts

U.S. and Guatemala coming to Frisco; and once around the world of football (in 50 words)