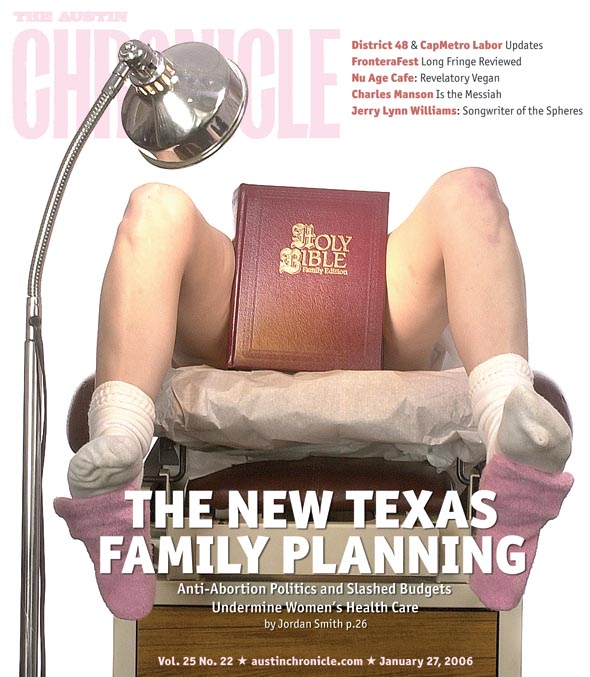 pdf
ON THE COVER:
The New Texas Family Planning
news Texas Health Care by the Numbers

Democrats Unite Behind Howard for District 48

GOP uncertain how to approach run-off

District 48 election by the numbers

Who lives in District 48? A statistical breakdown.

Despite citizen efforts to intervene, negotiations have not progressed

Homeless advocates cry foul over APD's Operation Out of the Box, which netted more than a dozen suspects for allegedly buying stolen property

Speed and lack of public input criticized in hearings

Proposed local historic districts would give neighborhoods some architectural and planning control.

Bill Moriarty's lawsuit against the city opens a can of worms on contracting, conflicts, and a good ol' boy network of city contractors

Bush tries to squelch democracy; and the scandal is deeper than Abramoff

Lola Stephens feels she's blessed to have her cafe open, but trust us: Austin diners are the ones who are blessed

The legend of Jerry Lynn Williams

Live on the Radio

The Paul Green School of Rock music presents 'The Wall'

Fantastic Illusions Worth Dying For

I Know the Truth

A View of the Woods

We Are Your New Gods EP

Revenge of the Phoenix
screens

Runnin' With the Wolf

One man takes on the used-game business model

Will Wynn represents for the Austin gaming industry (kind of), and Richard Garriott gets the hall-of-fame treatment

Punk, Puppets, and Manson as Messiah

Take control of an elite cadre of players, but be warned: This tournament is more than mere baseball

Sid Meier puts the player in the role of Supreme Leader

Why 'Love Monkey,' the newest 'Sex and the City' knockoff, might succeed where others failed

Annapolis is a thick but hardly meaty slice of old-school Hollywood hokum.

Steven Soderbergh’s Bubble is likely to be remembered as the adequate but unspectacular first volley in Mark Cuban and Todd Wagner’s modern experiment in vertical film integration.

End of the Spear

Members of the violent Waodani tribe of Ecuador kill five Western missionaries, but as a result they choose to abandon their kill-or-be-killed ways.

A curious, postmodern sort of buddy comedy, The Matador is like Death of a Salesman if Willy Loman had been a contract killer.

Nanny McPhee is something of a rarity: a movie for children that is about children and their world.

Know this going in: Sex and violence are the currency of Spike & Mike’s gory, twisted economy.

This tale of the ongoing hostilities between vampires and werewolves is pockmarked by the discordant likes of Puscifer and Slipknot.
arts & culture

Of Cactuses, Crickets, and Cars

With a special lecture and three concerts of his music in Austin, Wolfgang Amadeus won't be hurting for recognition of his 250th birthday this week

For its first concert of 2006, Sharir+Bustamante Danceworks not only showed off new dances, it let the audience question their creators about how they were made

'Sweetest of Nights' isn't just the title of Karen Mason's new CD, it's what you can expect from the musical sensation's Austin Cabaret Theatre appearance

For an evening that included a mutilated cat, a self-loathing writer, and selling one's soul, the second Thursday at the 2006 FronteraFest Short Fringe proved surprisingly upbeat

'House' and 'Garden,' Alan Ayckbourn's coupled comedies performed in tandem by a single cast, is really one show divided between two stages

Along with the sneakers and toys it sells, Motive 807 shows art, and most of it is really fresh and funny, like the current eight-artist show 'Three Snaps Up'
columns

The poetry of the right-wing soul: an appreciation

Stephen gets caught, wants to buy Drew a bra, and is already picking out his attire for the Texas Film Hall of Fame

Magnesium taurate has considerable potential as a nutritional supplement, since both magnesium and taurine supplements improve a number of health conditions

Dos and don'ts of courtroom conduct

The family-owned Dixondale Farms of Carrizo Springs is the largest and oldest producer of onion plants in the U.S.

The U.S. women come out on top in the Four Nations championship, and more