pdf
ON THE COVER:
Hang the DJ
news

KUT by the Numbers

That ringing sound you hear? It's the cash register at Austin's public radio station.

In a district designed to favor the GOP, Democrat Donna Howard needed a surprising mere 73 more votes to avoid a run-off.

BY WELLS DUNBAR AND AMY SMITH

The former manager of the Austin Clean Water Program files suit against the city, claiming defamation

Office of Women's Health official resigns in protest, comes to Austin to speak out

Beyond the Poverty Line

Court rules 55 years for 24 ozs. of pot is not cruel or unusual

Point Austin: Kicking Around the Bonds

This week's action at City Hall

Hungry Planet: What the World Eats

Ambling around the aisles at HEB Plus! and marvelling at how busy Martin Yan is these days 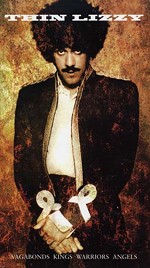 Art, food, football, TV, and even a little music: this one's got it all

Live Wherever You Are

Listening closely to Last.fm and Pandora

Billed as 'a new spin on drama,' the drama of 'Rollergirls' is limited to the petty arguments of whiny women having trouble getting along, because, well, you know how women are

This delicately horrific yet artful documentary examines the destruction of Lake Victoria by the omnivorous Nile perch, and the dire consequences this causes the Tanzanian people.

Looking for Comedy in the Muslim World

Albert Brooks again sallies forth where others fear to tread, although his comic results are more mildly amusing than riotously funny.

Although long on style and concept, this film lacks the primal urgency of Shimizu’s 2003 J-horror blockbuster Ju-on.

Unoriginal but pleasantly prosaic, Woody Allen's latest is a diverting story of crime, love, and luck that conducts itself with a refreshing absence of moral judgment and omniscience.

Instead of a great story about the conflicted origins of the American nation, Terrence Malick interrupts his transcendental observations for a dopey love story between John Smith and Pocahontas.
arts & culture 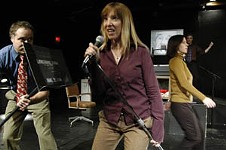 The new political theatre invites you into its messy, sexy conversation

In remounting Tapestry Dance Company's 'JASS,' Artistic Director Acia Gray is seeing how dancers, like jazz musicians, take their time as they get older

The fire at 304 E. Fifth has forced choreographer Ellen Bartel of Spank Dance Company to close Center Studio, the dance space she's been managing there for a decade

The Gospel of Lead

Arthouse's Talking Art with Dario Robleto and Jeremy Blake is a good bet for a stimulating afternoon, with two rising art stars who have a history of weirdly personal, spicy commentary

Improv, Butoh, cabaret, and one of those commanding performance moments that make FronteraFest made up the Short Fringe 2006 Best of Week One
columns

In the religious right's new democracy, principles prescribed by man have no value in the war between heaven and hell

Silence is not an option, if our Constitution is ever again to rise from the paper on which it was written

Stephen remembers the bawdy Shelley Winters and goes to an all-girl affair!

What is the evidence that hoodia works as an appetite-suppressant?

The rules of bowling, and one doozy of a Chilean diplomat