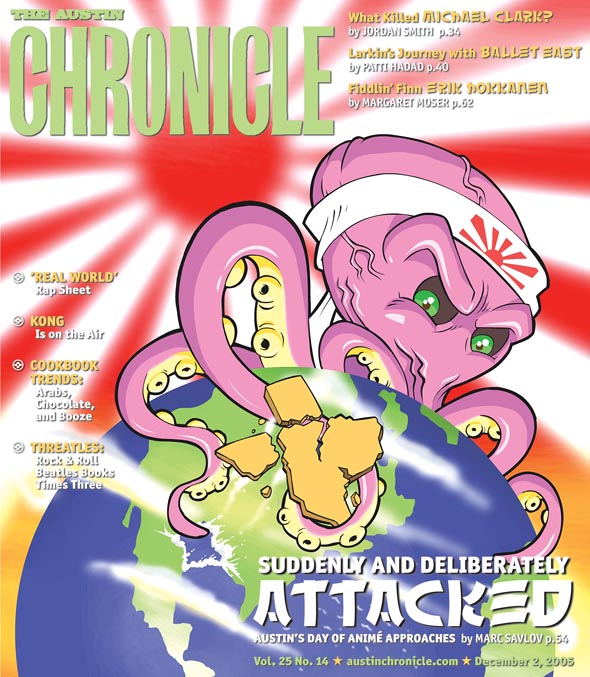 Trouble at the ME's Office

He survived battles with Daryl Slusher ... surely he can get through this

City capitulates to development plans on the Bull Creek watershed

Bush tries branding his critics as unpatriotic, wailing that it is 'deeply irresponsible' to question his motives 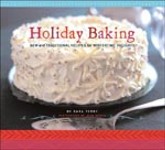 Charcuterie: The Craft of Salting, Smoking and Curing

Chocolate Obsession: Confections and Treats to Create and Savor

The Domaine Dupeuble Pere et Fils 2005 is the one; plus, taking measure of the Mercury's rising

Five From the Erik Hokkanen Collection

David A. Jasen and Gene Jones

All Over the Map: True Heroes of Texas Music

I Hope You Are All Happy Now

For the Imperial Flower Combat Trooper on Your List: Austin-Accented Animé on DVD

Word from the Independent Spirit Awards and Sundance fronts; plus, 'No Pain, No Gain,' Bobby Cannavale, and 'Light From the East'

One person's idea of empowerment is another's idea of sexual looseness. So, who decides what's what?

Knowing Me Knowing You

The 'Knowing Me Knowing You' two-disc set comprises all six episodes of the show, one of the most hilarious satirical comedies in recent memory. and is loaded with special features

All That I Need

Movies this bad don’t often get released anymore, a circumstance that instantly raises the curiosity factor of All That I Need.

Christmas in the Clouds

This Native American romantic comedy, which won the Audience Award at the 2001 Austin Film Festival, arrives in theatres four years late but seasonally right on time.

This vertiginous documentary about snowboarding talks with the sport's greats and shows them in action, rocketing down crag-encrusted, virgin slopes like buckshot fired from God’s own 20-gauge.

Love and sensation: It's all the same thing to a young gay Swiss man who leads a dangerous life.

Consider this brick No. 1 in the fall of the house of Usher.
arts & culture

King Kong: You're on the Air, Ya Big Ape!

As 'King Kong' storms into cinemas across the globe, the Violet Crown Radio Players are bringing the simian sovereign to life onstage in a 'lost' radio adaptation of the 1933 film

'Pale Idiot': Return to the Rudeness That Started It All

As a celebration of 10 years of rudeness, the Rude Mechanicals are reviving the show that started it all, Kirk Lynn's absurdist comedy 'Pale Idiot'

'Two Donuts,' a play by José Cruz González, was presented to the Widen Elementary School student body by the UT Department of Theatre and Dance as part of its Fall 2005 Youth Theatre Tour

'The Fourth Season: Works by Ray Donley and Rosanne Olson'

A full array of masks populate the photographs of Rosanne Olson and paintings of Ray Donley, making 'The Fourth Season' an exhibition full of metaphor for both disguise and liberation
columns

There's trouble in Nick & Jessica's paradise, and who are the Butthole Sniffers?!

Recovery from HIV: news or rumor?

How do I find out if I have 'leaky gut syndrome,' and how is it treated?

Unsolicited items in the mail – what happens if the item is for someone else?

BY MELISSA DEVINE AND LUKE ELLIS

Robert Cave's Albert Icehouse in Albert, Texas, is a great place to stop between Austin and Luckenbach for a cool beverage and live music on Saturdays

His facts will getcha every time