pdf
ON THE COVER:
What Happened to the No-Kill Millennium?
news 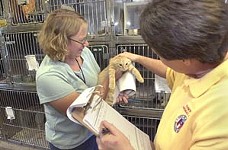 What Happened to the No-Kill Millennium?

Town Lake's Future: Fix It or Ditch It

The animal center needs a major renovation, but funds and political will are needed

The not-so-shocking election story, in numbers

Austin – the Only Gay Place

Travis defeated Prop. 2, but the rest of the state wasn't even close

Democratic Disagreements and the Election

What will county election results mean for local Dems?

Find the Real Reporter: A Questionnaire

The city has decided to be the arbiter of quality journalism. We decided to help them out.

Denver legalizes weed, and a record number of Americans think it's a good idea

Price tag at three times that of City Hall.

Another Round This Week In Champion Sisters Fight

City wants to avoid court fight over development, saying a loss could make it even worse

Shots fired in Aquifer battle ... and the target is you

While Bush's Harriet Miers Supreme Court nomination prompted teeth gnashing from activists and interest groups on both the left and right, the president's about-face with the nomination of Samuel Alito has calmed conservatives and left the gnashing to the left.

Wave a white sheet at City Hall, and the Keystone Kops kome running

Neighborhood activist gives us an earful on proposed downtown high-rise

Leaked internal memo shows a company scheming to cut back on employee benefits; and winner of common-sense competition will get $100,000 smackers

Much ado about Manor Road; plus, Ahmad Modoni returns from Oaxca and sadness at the Chicago Dog House

How has the menu-rotating restaurant's fare held up after its big move?

A safari in Pflugerville
music

Howlin' Wolf Does Not Wear Panties

Most Known Unknown, Califormula, The Bay Bridges Compilation Vol. 1, Block Movement, The Mouse and the Mask

The Moon Was Blue

Are the Coens coming back to Austin? Plus, Anne Rapp and 'Double Wide,' Jenn Garrison in Italy, and Jacob Vaughan kind of gets hit on by Dave Carradine.

It could be the series' best

Myla Goldberg’s novel about spelling-bee fever, a family in chaos, and religious/mystic exploration arrives on the screen with all its faults intact but few of its charms.

The first release from the new Weinstein Co. is this thriller starring Jennifer Aniston and Clive Owen that never fully engages our sympathies.

Dorian Blues has wit, humor, good performances, and clever technique, which catapult the film into the front ranks of coming-out movies.

Harry Potter and the Goblet of Fire

The fourth Potter emphasizes the emotional over the gothic

Inside the mind of a Palestinian suicide bomber: That’s the guarded territory broached in Paradise Now, a film fashioned as a thriller rather than a psychological study.

Joaquin Phoenix is terrific as the musician Johnny Cash, whose rise, fall, and resurrection we watch as he does the Benzedrine 12-step in order to earn the love of country-and-gospel sasspot June Carter.
arts & culture

For its fall 2005 concert, UT Choral Arts Society draws on the rich repertoire of English sacred music, transporting its audience to a London cathedral

The folks at the Hideout didn't scrimp on the titular treats at the third annual Wafflefest, and the waffles and their toppings were as good as the improv

To break in its new home in the Mansion at Judges' Hill, Austin Cabaret Theatre has booked a class act of the musical theatre: Lee Roy Reams

Whole Foods is about to get more arts-friendly, Austin moves closer to Puerto Rico, Shear Madness has a new detective running the show, and art at the new fire station really rocks.

Intense is an apt word for describing Shakespeare's bloody Macbeth, but intense moments in the UT Department of Theatre & Dance's new revival are few and far between

Why was my newborn given a vitamin K shot before we left the hospital?

Why do I need a will? What happens if I die without a will?

Who ranks 16th among 21 industrialized nations when it comes to achievement in science?

The Lady Longhorns will have to wait 'til next year.