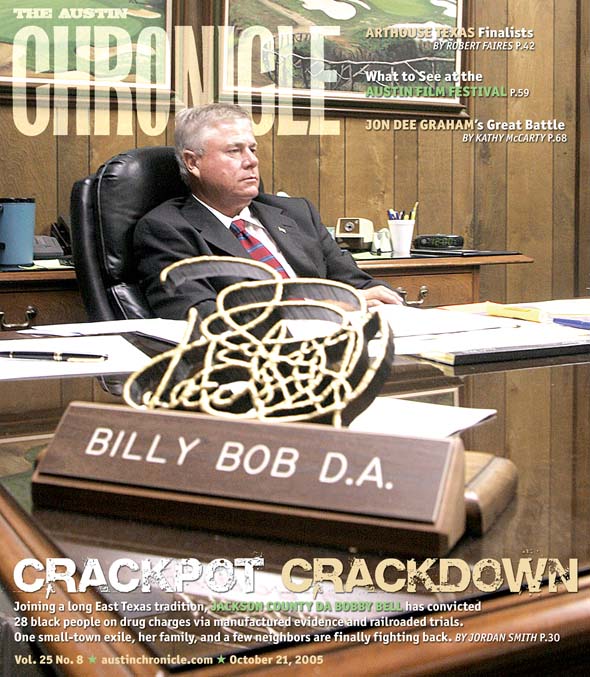 Who's the Hog in This Circle C Water Fight?

Developers tout proposed high-rise as perfect fit for Downtown; neighbors aren't so sure

When it comes to equality, a surprising number of major Texas companies are downright liberal

Texas Business and the 'Gay Agenda'

No on everything. Double no on Proposition 2.

Guerrero Colorado River Park Gets Its Day in the Sun

Chris Bell lays out his Don't Mess With Ethics campaign

Top Nonsense and No Nonsense Contributors

Dollars are the ammo in same-sex marriage war

Human Rights? Not at Work

Lead-Laced Garbage Case Back in Court

The Future of Shoal Creek Boulevard

The sunny side of the state's assault on social services

Heretical entrepreneurs choosing community, quality of life over profits; and Perry comes to the rescue of our poor, hard-up judges, raising their pay to three times the average Texan's income

What Does Business During the Day and Doesn't Suck?

Drakula's Romanian cuisine is all treats and no tricks

The new Paggi House's model is 'Nothing you expect, everything you want.' Um ...

A Hell of a Year

More trees fall victim to the smoking ban back-and-forth, while Austin nurses a huge Sparks hangover and Cowboy Mouth is just glad to be anywhere

Children of Nuggets:Original Artyfacts from the Second Psychedelic Era 1976-1996

You Could Have It So Much Better

What to see at the 2005 Austin Film Festival

Burnt Orange has been living in a cave, while Texas looks to be trending toward Santos; plus, 'Ape Shit,' 'Chainsaw,' and 'The Breakdance Kid'

Geena Davis is not really the president, but you might be surprised to learn how many people are riding the coattails of her administration

Doom is not so much a film as a marketing tie-in, albeit one with some exceptional production values.

Dreamer: Inspired by a True Story

You could call it Seabiscuit Jr., but this horsey heartwarmer does something surprising in spite of its underdog sports-movie formula and shameless emotional manipulation: It manages to be an enjoyable movie about and for girls.

This hazy remake pales in comparison to John Carpenter's original fogbanks from 1980.

High-schoolers protest when the principal outlaws their freedom of speech.

Basically a story about four young people whose car breaks down in the boondocks and the wretched things that befall them while first seeking help and then escape, this bare-bones horror film takes the hoary formula and runs wild.

This Venezuelan film about the kidnappings that are endemic in Caracas bursts with stylish technique and gruesome tension.

With a script by David Benioff (25th Hour) and direction by Marc Forster of Monster's Ball fame, Stay is an ambitious experiment that never quite jells.

The Work and the Glory: American Zion

Volume two of this fictional representation of the Mormons' migration West.
arts & culture

The Austin Symphony's local premiere of Kevin Puts' 'Symphony No. 2': 'Island of Innocence,' evokes the cultural shift after 9/11 in a dramatic score

This fall, Fidencio Durán's 20 years of painting have earned him a midcareer retrospective at Mexic-Arte Museum

AMOA's Symposium on Austin Art: How Deep Is Our Love?

The Austin Museum of Art symposium Self Portrait: Austin Art in Local, National, and International Contexts was a positive day of critical dialog and amazingly open-minded community work

In 'American Fiesta,' Steven Tomlinson's quest for a set of Fiestaware leads him to embrace his past, imperfections, and those who are different

A Man for All Seasons

In Austin Playhouse's 'A Man for All Seasons,' David Stahl's immaculate Sir Thomas More stands his moral ground with humility, humor, and insight

'Surface/Depth,' an exhibition of 30-odd wood-fired ceramic vessels by Chris Campbell, is a tantalizing feast of color and form
columns

When Gravity Fails: Notes on the influence of Ed Lowry, 'Crazy Mama,' and not sweating the small stuff

What Stephen did last week and what he's probably going to do this ...

I sometimes take 5-HTP to help me sleep and am surprised at how it seems to help me with irregularity. Why would it help the GI tract?

The Los Ebanos Ferry takes passengers from the U.S. to Mexico and back again with the simple tug of a rope