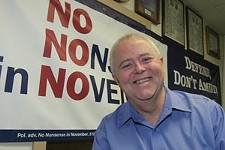 Where Can We Marry? The U.S. Legal Landscape

Gays and lesbians enjoy full legal marriage in only one state

Saving HeteroTexas: God and the GOP

God – or rather, those who claim to speak in his name – works in mysterious ways this election season

In addition to sexual obsessions, we get to vote on railroads and mortgages too

Is the Hammer Nailed?

Yet another indictment of DeLay, this time for money laundering. Will it reverberate for other politicos?

Who needs Tom DeLay when zapping reporters is so much more fun?

Culture War: How to Fight the Right

Texas academics and politicians discuss the how to revive progressivism

Dyslexics Rule, at Least in October

How to get help parenting a dyslexic child in Austin

When the APD falls in love with Tasers, it's the Eastside that gets shocked

Firefighters put to work as FEMA publicity agents; and poor, desperate Bushites look to the American people to pay for their mess in Iraq

Virginia B. Wood in Austin

Wes Marshall in Luling and Lockhart

Get It All Over Ya: County Line on the Hill Celebrates 30 Years

7 runs aground, while Dot's Place rises from the ashes; plus, 'Sideways' at Spicewood and HerbFest

Home Is Where the Hatred Is

Rocktober dawns with some troublesome cartoons, another round of Hall of Fame voting, and the Black Angels' delicious drone

Bix: The Definitive Biography of a Jazz Legend

The Best of No Depression

Room Full of Mirrors: A Biography of Jimi Hendrix

Big Star: The Short Life, Painful Death, and Unexpected Resurrection of the Kings of Power Pop

Guided By Voices: A Brief History – Twenty-one Years of Hunting Accidents in the Forests of Rock & Roll

The founders on Fantastic Fest I

'Domino' premieres in Austin with Richard Kelly in attendance

'Not Lost' to Premiere in Austin

From South Sudan to North Texas

With the proliferation of shows featuring aliens out to conquer the Earth, I thought I would come up with a thought-provoking column. Then I heard the call of George Clinton.

The Man Who Fell to Earth and Bad Timing

Musicians make uneasy actors. With his directorial debut, 1970's 'Performance,' Nicolas Roeg characteristically tossed convention out the hotel window by casting Mick Jagger as one of the leads. He would follow up with David Bowie and Art Garfunkel.

The psychotically testosterized world of British football hooliganism, with its crimson tide of fist-in-mouth male bonding and lager-lout bad manners, is captured in this post LOTR Elijah Wood movie.

Even if these Shoes are not perfectly stitched, the fit is nevertheless comfortable and the look is polished.

Some may doubt the need to once more bring Dickens’ tale to the screen, but Polanski’s deft adaptation proves that there’s still life in that well-worn story of a boy who beats the odds.

As with many film adaptations of stage successes, David Auburn’s Pulitzer Prize-winning play about mathematics and madness loses something in its translation to celluloid.

The plot realistically mimics a teenager’s adriftness and tendency toward hairpin-turn mood shifts as it bounds from the wonderfully affecting to the decidedly idiosyncratic to the occasionally absurd.

This adaptation of Haruki Murakami’s eponymous short story is a delicate little curio, lighter than air and gravely philosophical at once.

Two for the Money

Pacino again plays another Mephistophelean type who mentors McConaughey's ex-jock in the intricacies of his tout service, offering tips to betters on the Vegas line, but the film is about as fresh as a day-old betting slip.

This frequently offensive and doggedly disgusting film about working in the restaurant industry is technically inept and wholly crude.

Wallace & Gromit: The Curse of the Were-Rabbit

This new animated comedy is a brilliantly conceived and executed bit of Brit wit, perfect for both kids and their parents and anyone even remotely interested in laughing themselves silly.
arts & culture

The Dish on Desire

In 'American Fiesta,' Austin's favorite economist / playwright / actor has plenty to say about what makes us want

Austin Theatre: Free for All (At Least for a Night)

A national audience development campaign that's offering a free night of theatre on Oct. 20 has cast Austin in a starring role for its national premiere

The Faces of Austin: Face-Off

City Hall gets more artsy this week with the debut of Faces of Austin, a new program that features 25 works by Central Texas filmmakers celebrating what makes Austin Austin

Ed Begley Jr.'s 'Cesar and Ruben,' a play with music, is a respectful and warm tribute to the life and work of United Farm Workers leader Cesar Chavez

One / the body's grace / Carmina Burana

Stephen sure is getting around, hobnobbing with the bigwigs and taking in all of the faboo fall fashion fetes

Is it OK to give worm medicine to children if you only suspect worms but don't have evidence of it?

Child support – how can the attorney general's office help?