Where to get help, how to give help, and events to ease the burden and heal the heart

Narrowing the drive through Town Lake Park has been studied to death ... so let's give it more study

Smoking Ban Kicks Off as Katrina Kicks In

Cigarettes are out at Austin’s clubs, but New Orleans musicians could be in

Attempt to move from state to federal court rebuffed

A good time to think about the best uses of community, democracy, and government

Support our indie coffee houses; and join the fight against library budget cuts

Shalimar's extensive menu shows the many influences of Pakistani-Indo fare

Bidding farewell to the inimitable T.J. McFarland; plus, Foo Swasdee Thais up Texas

The concept is genius, and there's actually more there than meets the eye
music

If 'We Can't Make It Here,' then James McMurtry's in big trouble

Echo & the Bunnymen, The Go-Betweens

Giving Up the Ghost

A Million in Prizes:The Anthology, The Stooges, Fun House
screens

The Collected Shorts of Jan Svankmajer

The two-disc 'Collected Shorts' spans 27 years, and while some of the films don't fully cross the CGI generational divide, you can see in all of them why animators like Tim Burton have been so strongly influenced by Svankmajer's work

Earnest and well-intentioned Dallas-based cast and crew have created a puzzling and inauthentic youth drama that promotes teenage sexual abstinence.

A Sound of Thunder

Abandoning any pretense of respect for the Ray Bradbury source material, this film manhandles the author’s delicacies into a lumbering and bewildered mess of grade-Z sci-fi clichés.

For all its gimmicky mayhem, Transporter 2 is an improvement over the original, completely setting aside such yawn-inducing cinematic standbys as a romantic interest and realism.

At once tremendously dense and gossamer-thin, this period romance/sci-fi hybrid from Hong Kong auteur Wong Kar-Wai is a riot of sight and sound that has an irresistible, elemental pull.
arts & culture 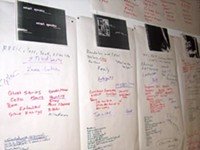 With $1,000 each and eight weeks, five teams compete to take theatre to a new level

How Zell Miller III came to be an acclaimed poet-performer is revealed in 'The Evidence of Silence Broken,' his hip-hop performance piece

Michael Frary, an influential Texas modernist, painter of Texas watercolors, and longtime UT-Austin art professor, has passed away at age 87

GlassTire, the online journal for all things visual artsy in Texas, has coerced assorted Austin arts organizations to stir up some serious chili this weekend

Gallery 3: Where the Students Hang

The University Co-op is sponsoring Gallery 3, a new visual arts exhibition space run by students, inside its building on the Drag

In a post-Katrina about-face, Republicans suddenly don't want to play the 'blame game'

Research shows that when folks with serious health issues do volunteer work, they don't notice their own aches 'n' pains quite so much

Is eating chocolate beneficial to my health?

Identity theft at the gas pump?

U.S. Men secure their place in the World Cup finals.