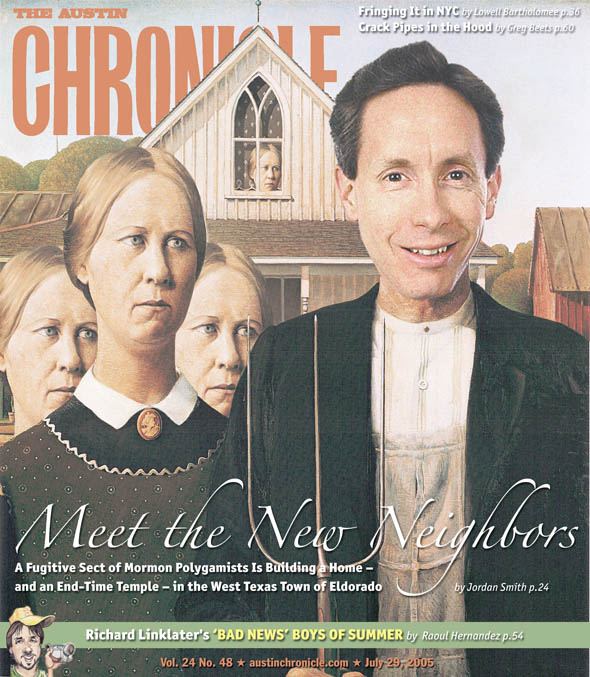 pdf
ON THE COVER:
Meet the New Neighbors
news Legal Problems of the FLDS

Quotations of the Prophet Warren Jeffs

The Banks of the Blanco

In Central Texas, lefties thrive on the Net

Computers intended for humanitarian aid held up at border

AFSCME steps up to the council budget table, and the bonds begin to take shape

What's up on this week's Council agenda

House Bills 2 and 3 die; it's back to square one

The dark art of science twisting; and if you're in your fightin' prime, Uncle Sam is watching 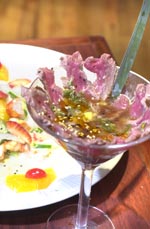 Sushi Japon puts it all together with restraint and good taste

Sweetish Hill is ready to celebrate; plus, Vespaio, P. Terry's Burger Stand, and many options on the Event Menu

It might be old-fashioned, but it never gets old

How I found a new favorite hangout
music It may be in Chicago, but there's something distinctly Austin about Lollapalooza 2005.

Already Platinum, Afta da Relays, Hate Me From a Distance, In Deuce We Trust, Pimp Stroll, The Life and Times of Wally DeLuxe

When the Vow Breaks

Countryman, Somewhere Down in Texas, The Outsider 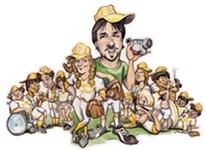 The Burnt Orange kids take on 'The Cassidy Kids': No. 1 in a series

'The King' finds a throne, Hanks finds another Wilson, and where you'll find time to help Marian Yeager; plus, Sandra Bullock should stay closer to home

The flirting has just begun. Yes, it's only the end of July, and yet the networks are already running promos for new shows that may not even premiere until late fall.

How great it is to have an outlet like this in town? Pretty great. But how great is this anthology?

Movie about master manipulators and the people who love them is rife with surprises.

Convinced that one is the loneliest number, a divorced woman uses man's best friend to catch a new mate.

While the unconventional Yes doesn’t realize all of its artistic ambitions, its depiction of romantic passion still resonates.
arts & culture An Austinite's account of taking the stage in New York City

With a hotshot New York design team on board, Arthouse makes a long-awaited start on the transformation of its second story

An award for Trio Contraste, a new contract for Peter Bay, a chorus of 'New York, New York' for Kirk Lynn and Rob Nash, and benefits for 'La Pastorela' and Hyde Park Theatre

Your Style Avatar gets all rock & roll on yo' ass this week! Word!

What's the deal with acrylamide?

A sea turtle's life has never been easy