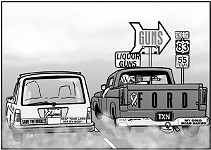 Progressives organize – yet again – to fight the right

Point Austin: A Life of Quality

In the shadow of another tragedy, the city takes a step toward justice

Where to go for sweet relief from the heat

Rachael Ray is on her way; plus, a tasty local tag team

Smog descends on Austin in the guise of Bill Callahan

Murder in San Antonio, an old Austin scenester passes by the Bay, and the sorry state of U.S. pop. Happy Fourth of July!

A River Ain't Too Much to Love

For Those Who Know

For Those Who Know

Hokum If You Got 'Em

Don't Slander Me, Gremlins Have Pictures 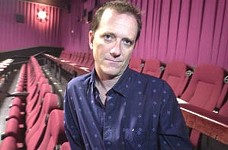 Inside the Actor's Superego

How Michael Baldwin got here (hint: It involves a showbiz upbringing, Oreo cookies, and shrieking armadas of flying, brain-sucking spheres)

From Method to Make-Do

Austin's myriad thespian coaches teach us to seek, grow, and do … or at least act like it

It won't torment you with joint horoscopes, Starbucks ads, or group bulletins full of memes, but Conspyr – Austin-based and mere months old – is a networking site

'What we had,' said Jerry Lewis, 'was lightning in a bottle.' And now we have it in public domain.

With this disturbing story about the lingering affects of child sexual abuse, Gregg Araki creates a film that is psychologically rich, emotionally haunting, and technically superior to anything he has ever done.

Although this Mighty Ducks/Bad News Bears clone is predictable and inoffensive, it's filled with sweet humor and well-drawn young characters.

In this breezy Chinese-American coming-out comedy, ethnic, generational, and family identities collide with the anything-goes ethos of modern love.

War of the Worlds

Spielberg and the gang at Industrial Light & Magic have knocked the ball not only out of the park but out of Earth orbit as well.
arts & culture

Oh, Give Me a Home

Summer of the King 'B'

Relax, Schroeder! Beethoven gets his due at this year's Austin Chamber Music Festival.

Bigger Is Better, for Once

The Gilbert and Sullivan Society of Austin's latest production of 'The Mikado' is a somewhat flawed jewel, all the more charming for its blemishes

As long as it has its mind squarely on fanged freaks, horror cliches, and musicals it can shamelessly riff off, 'Batboy: The Musical' is one bloody good time

Please, don't ask my son if we are related

Ooooh, Oprah! Grrrrl, those sales clerks locked you out? And that model did what to Cameron? And Leo DiCap got hit where? What is this world coming to?

We need your participation in a focus group, specifically to gather the insights of the Austin gay male community regarding issues about volunteerism.

Using DNA to provide customized vitamins based on genetic needs

Are the Texas Hold 'Em poker tournaments that I host in my home illegal?

BY LUKE ELLIS AND LAUREN CATON