pdf
ON THE COVER:
Icing the Batter Electric
news 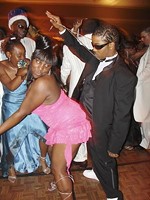 Photographer Will Van Overbeek goes back to school for prom and finds a whole lotta shakin' goin' on.

A Brief History of School Desegregation

News briefs from Austin, the region, and elsewhere.

U.S. Fish and Wildlife Service has abandoned its job of protecting the salamander's aquatic environment, says alliance in intention-to-sue letter

A farewell to faithful servants, and a preliminary look at the city's priorities

Norquist disowns stinky pal; and forget about a living wage

Beau Theriot has got the Oasis back on track; plus, grillin', tea, 'The Future of Food,' and Roy's recipes Ana Egge and Adam Carroll reflect over their songwriting adolescence

Choosing Darkness, a Chairman, and the much-appreciated new air-conditioning at Emo's

The Further Adventures of Lord Quas

Another Day on Earth

Get Behind Me Satan
screens

The adventures of Taylor Lautner and Taylor Dooley (Sharkboy and Lavagirl, respectively), in conversation

'Freaks and Geeks' fans and their bittersweet assembly at the Alamo

Rodriguez and Q.T. go back to the grind; plus, 'Screen Door Jesus,' back to Sundance, and all kinds of opportunities to get involved

This ain't your grandma's antiques show

The Adventures of Sharkboy and Lavagirl in 3-D

Robert Rodriguez adds a dimension with this kids fantasy movie, but only in the most literal sense – 3-D.

A gripping piece of splatterpunk, despite the fact that there's not much to it and the plot crumbles in the third act.

Instead of reworking the original TV show’s subject matter regarding class and marriage, this is plodding mimicry featuring a predominantly African-American cast.

It's All Gone Pete Tong

A superstar DJ goes deaf in Ibeza in this mockumentary that observes his process of coping.

This narrative re-creation of the skateboarding doc Dogtown and Z-Boys is a blast, as accurate as it ought to be with more than enough mythology and gut thrills thrown in for good measure.

Sprawling documentary about the globalization of the wine industry is ambitious but frequently directionless – for true connoisseurs only.

More than his Philadelphia school of rock, it's blustery instructor Paul Green who becomes the true subject of this documentary.
arts & culture May I Have the Envelope, Please?

Austin hosts not one, but two national conferences on the arts the same weekend in June

It Is Easy Being Green

Rather than make you puzzle out for yourself what environmental art is, Austin Green Art is hosting a summerlong, citywide exhibition that shows you what it is

Irrational and impotent posturing distinguishes the figures in the drawings that George Lopez is exhibiting in the Eastside Art Palace's "Figure It Out."

The Mystery of Edwin Drood

The artistic genius of 79-year-old cinematographer Haskell Wexler is only the beginning of his story; the passion and eloquence of his lifelong political commitment stand equal to his cinematic achievements

We take cars for granted, yet people have been living like this only a short time, and, when this era exhausts itself, people may never live like this again. What will they think of us, I wonder.

Are you languishing in one of 'The Stages of Self-Acceptance for Gay Men'? Let Uncle Stephen guide you through.

Is an annual DEXA test enough to assure that I won't ever develop osteoporosis?