From her office vantage point, beside the rosy glow of the majestic Capitol dome, 78-year-old feminist, political powerhouse, and gay rights lobbyist Bettie Naylor keeps a watchful eye over the doings at the legislature

From the statehouse to the bathhouse, gay Texans better watch their backs

Austin's gay bars and then some...

Kate Getty talks to the Notorious One

Top of the Heap The Island of Dr. Ersek

She went to sleep Kelly, she woke up Jennifer Aniston

AMD Not Budging Under Pressure to Reconsider Move

Kim and Clarke race for the line

DeLay-related organization promised corporate money would get to GOP candidates

Transportation board responds to activist calls for more compact-city planning

Forgotten but Not Quite Gone

The 79th Legislature ends not with a bang, but lots of whimpers

The city takes a small step toward racial reconciliation

'Texas – Third World and Proud of It!' and a job-busting and environment-exploiting agreement

Wake up to the delicious diversity of our town's breakfast pastry

More food on TV, openings across Austin, and wine flowing in the streets 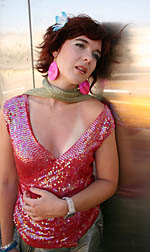 Talkin' about the next generation

As the Texas film industry tries to keep up with New Mexico's and Louisiana's, the Lege approves an incentive program tall on talk but short on funding sources

A one-of-a-kind essay centered on art forgery and hoaxes that is built from spare parts, questionable coverage, obvious overdubbing, and outright bluff, 'F for Fake' is a masterwork most often hailed for its hijacking of documentary form to tease cinema's capacity for making truth out of bullshit

This psychological drama from Denmark is interesting and well-performed, but it's no Cain and Abel.

Ron Howard and Russell Crowe have once again combined their efforts to create a big Hollywood biopic that exudes the strong whiff of Oscar bait.

Italian story of a surgeon who falls in love with a country girl (Penélope Cruz), flirts with the self-pitying mindset of the slumming elite, and becomes something of an apology for bourgeois classism.

A contemporary gangster film that both looks and feels like a Britnoir classic filtered through the Jam’s bang-on sense of style, Layer Cake takes a realistic approach to Britain’s criminal underclass.

The Sisterhood of the Traveling Pants

For a movie about magic pants, this film shows a surprising level of sophistication – in its performances, its production values, and its emotional maturity.
arts & culture

The 2005 class of the Austin Arts Hall of Fame

Message in a Can

The funniest person in town now, Austinite responsible for critical mass, 'Intergalactic' to go national, and the Map covers downtown

Like the police forensics center they stand before, the flora and fauna of Art in Public Places' Elevated Prairie deal with the inevitable: the life / death / life cycle
columns

Prelude to a column on cinematographer Haskell Wexler – by way of defending the ideological, political, and philosophical passions of John Sayles and Maggie Renzi against the intellectual bankruptcy of most current film criticism

Special precautions need to be taken when prescription meds are combined with other meds, with some herbs, or even with some foods

The 'Baseball As America' exhibit at the Museum of Fine Arts, Houston, is a baseball lover's dream come true

How is "black vinegar" different from regular vinegar?

Kim Cattrall vs. a monkey