pdf
ON THE COVER:
The Memories of the Long-Distance Runner
news 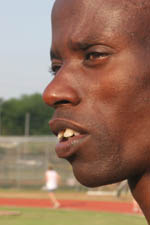 The Memories of the Long-Distance Runner

After surviving a holocaust, Gilbert Tuhabonye runs through life to tell his tale

Despite the pain of the past, running and life are still fun

An African nation's brutal past ... and present

Clarke Garners Most Votes, No Guarantees

Dealey: No Regional Base + No Target Audience = Few Votes

Restoring Services a Priority for Dunkerley

An Austinite defends his product as parody

The anti-war movement has flagged, but some Texans still hard at work

Place 3 surprises, while the rest of the vote follows the program

Making America dependent on domestic oil instead of focusing on conservation and renewable fuels is an ass-backward energy policy; and the ridiculous notion that we should treat corporations like living beings

Blanco celebrates its essence with a brand-new festival

The vast majority of the customers are Vietnamese, which is something we love to see

El Borrego de Oro No. 1 is in Red Rock, halfway between Lockhart and Bastrop, but from the tastes at unit dos, we would have expected it to be somewhere deep in Mexico
music

The smoking ban passes, and Austin falls down the rabbit hole – only to find Ms. 'White Rabbit' herself already there

My Education, the Bright & Hollow Sky

The Kick and the Snare

Who is Mike Jones?

This Is How It Is Lost

Generations of Change, From the Ashes, Standards, Lost at C Flat Sharp

What I Really Mean

Crackin' Up, M.4, Stock Market, The Vinyl Disaster Mixes, "According to Plan" b/w "Thoughts on the Floor"

Live at the Fillmore

Rick Broussard's Two Hoots and a Holler, Songs Our Vinyl Taught Us
screens

A report from the fourth annual Tribeca Film Festival

Linklater maps out our 'Fast Food Nation'; plus, Andrew Shapter, Dante James, and a Mitchum among us

I'm not an expert on American Idol, but I play one on TV

You have to wonder about some of these people

Will Ferrell, Robert Duvall, and Mike Ditka all appear together in a film that sings the praises of kids soccer and caffeine addiction.

An acute observation of the ways in which we fail to communicate marks this French film, which won the screenwriting award at last year's Cannes Film Festival.

This Korean cop film is based on the country's first real serial-killer case in 1986, a case that flummoxed the police along with everyone else.

In this stale thriller, young FBI profilers have a hard time figuring out who is picking them off, one by one.

This banal and lukewarm slice of romantic comedy is as soft and ephemeral as any colorized Ted Turner outing.

The Wild Parrots of Telegraph Hill

Well-considered, beautifully made, and often gripping in its narrative, this film examines a man's complex relationship with a flock of wild parrots.
arts & culture

Choreographic explorers Sharir & Bustamante and their 20-year expedition of discovery

Art in Public Places sets a fingerprint at the forensics lab, and Austin theatre is all over the map – of the U.S.

Pat Hazell's 'The Wonder Bread Years,' his solo comic riff on growing up as a kid in the Sixties, touches the late-generation baby boomer in all of us

Once again, Austin has demonstrated its deep indifference to front-line troops who nourish the music scene it purports to be so proud of

As the semester begins, I present my high school seniors with the words of our great American authors and hope they provide a road map or the bread crumbs that can lead them through the journey of their lives

Stephen does drag in cartwheels or cartwheels in drag... you'll have to read to figure it out

What is the rationale for the blood type diet for weight loss?

European season draws to a close