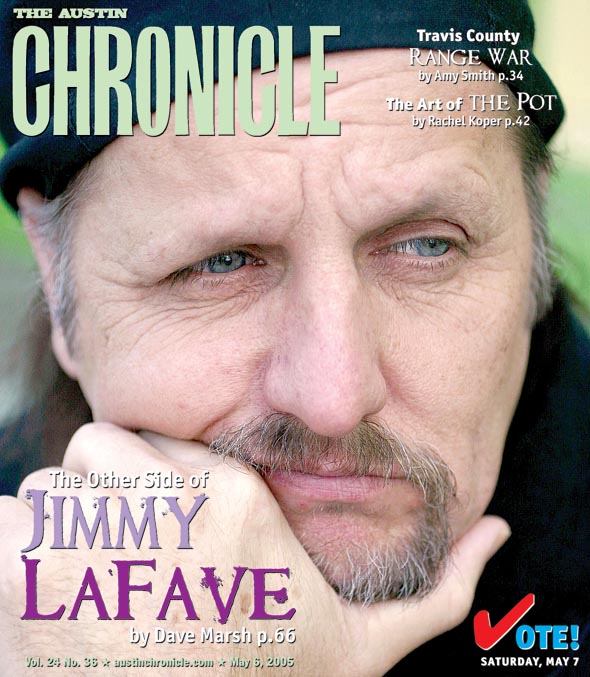 pdf
ON THE COVER:
Ribbon on the Highway
news

The Range War at Commissioners Court

Some Bars Cross the Smoking Line

Who's picking whom in the City Council race

Most due to natural causes; African-American kids disproportionately affected

Sale: One new identity for $35, two for $50; and What legislators, cigars, Fleetwood Mac tickets, Starbucks, and limo rides have in common

Suzi Yi took a brave step entering the fray of Asian restaurants in the West Lake-Rollingwood area. Has she been rewarded?

Will 'Cooking Under Fire' get an audience anywhere near that of 'The French Chef'? Plus: Mother's Day musts.

Forget what you know about fast-food and takeout joints
music

Ribbon on the Highway

Field trips to Houston and San Antonio, to see people coming to our own field in September

Best Reason to Buy the Sun

Waiting for the Sirens' Call

Let There Be Morning

Shorts on a Shoestring

The Texas Documentary Tour presents 10 Under 10

Eeek! A precious, affluent white woman is lost! Eeek! Evil looms around every corner, and the biggest victim of all? Plus, here comes Jenny Hart.

With loyalty to such cinematic emperors as Fellini, Pasolini, and Antonioni, the Criterion Collection's devotion to post-war Italian masterpieces is serious business. Seriously buffo, comico, spiritoso in the case of neo-realist Pietro Germi's 'Divorzio all'Italiana' (1962).

The paths of a seemingly unconnected, multicultural group of Los Angelenos cross in the most compelling American movie to come around in a long while.

An occasionally creepy but mostly rote remake of the 1953 horror classic, with some putatively clever jibes at a certain high-profile hotel heiress.

Ridley Scott's Crusades epic is a historical spectacle on the order of Gladiator and a dissection of war, as gritty and illuminating as Black Hawk Down, that takes flight when it becomes a canvas for ideas and ideologies in action.

Nominally the story of a 13-year-old girl who longs for a baby, Todd Solondz's latest is provocative, wicked, even bleakly funny, and ultimately empty.

Director Jan Hrebejk’s stylishly interwoven tales of modern-day Prague add up to a melancholy, comedic riff on what it means to be European these days.

A homophobic Israeli assassin insinuates himself into the life of a former SS officer's gay grandson in hopes of learning the Nazi's location in a well-intentioned but ultimately simplistic plea for tolerance all around.
arts & culture

Revenge of the Return of the Son of the Graphics Giveaway Begins!

If Scrooge McDuck, Bruce Wayne, and Veronica Lodge are giving away millions, it can only be Free Comic Book Day, Part IV

Get Your War On

Our 'rights' can be lost in many ways, one of which is to chip away at them because of health, community, decency, moral, and/or ethical standards

The International AIDS Candlelight Memorial service will be held Sunday, May 15, 8pm at Republic Square Park on Guadalupe

Making the fashion scene with Your Style Avatar, Mr. Stephen McMillan Moser, it's hard to imagine when he has time to worship at the altar of Trinity Broadcasting Network... but he does. Hallelujah!

What are the benefits of taking the 'fancy' form of folic acid, 5-methyl tetrahydrofolate, and how would I know if it is better for me if I decide to try it?

BY LUKE ELLIS AND NATHAN MOSS