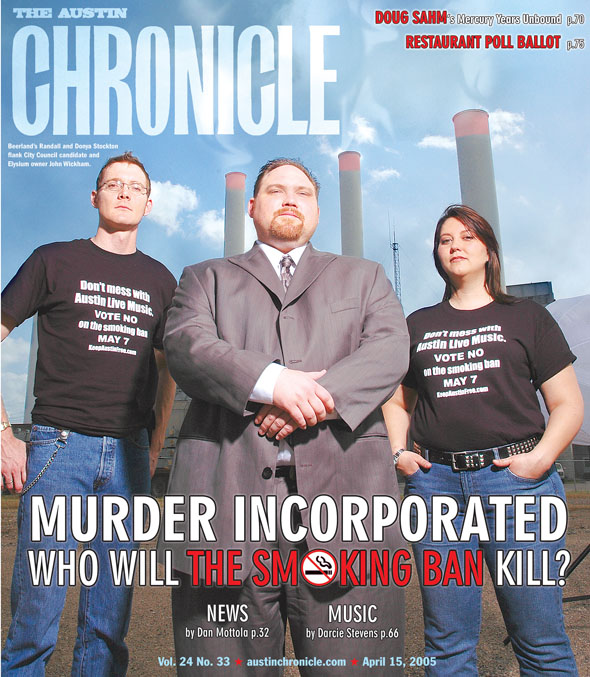 Across the country, perspectives on the smoking bans offer a very mixed bag

Smokey and the Bandit

Our picks in the May 7 elections

The good, the bad, and the ugly at the 79th Legislature's halfway mark

The Lege kills it, ostensibly to save it

Downtown neighborhood battle ends with a thud instead of a bang

Faith-based environmentalism ... and we don't mean the kind W practices

When it comes to sharing the wealth, Texas has its priorities top-down

Hearty, affordable fare that won't cost more than the pocket change left over after your visit with the tax man 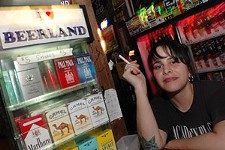 Sorting through the spring flood of new records and old festivals, plus a deeper look inside George W.'s iPod

Lowriders on the Storm, Taters

Only Funny the First Time

Summer shoots, Senate bills, and a few film festivals you should know about; plus, Bob Ivy plays with dolls

A dream home on Long Island is not all it's cracked up to be: The family inside sees dead people.

This second incarnation of the Mike Judge- and Don Hertzfeldt-produced animation anthology is, if anything, even better than the first.

Billy Bob Thornton plays an Arkansas husband who attempts to redeem himself after critically injuring his wife and killing their son in a car accident four years earlier.

An ad hoc dad turns out to be far better than the real thing in this sentimental Scottish yarn.

Documentary about the band the Flaming Lips – the crazy/bizarre Oklahoma outfit that, despite itself, rose to national prominence.
arts & culture

Boyd Vance, founder and director of Pro Arts Collective, acclaimed musical theatre performer, and leader in nurturing and promoting African-American arts for a quarter of a century, has died

The State Theater Company's 'Nickel and Dimed' makes Barbara Ehrenreich's book about the desperate plight of the working poor flesh and blood, immediate and urgent

'Sin City' may offer almost no suggestion of a moral substructure. But it insists there is morality, no matter how fragmented.

How's your heart on HAART?

Where, when, and with whom was Your Style Avatar seen and whom did he see? Hmmmmm? And what about the Pope? Or Prince Charles? Hmmmm?

Treatments and causes of asthma attacks

Attack of the killer soccer fans