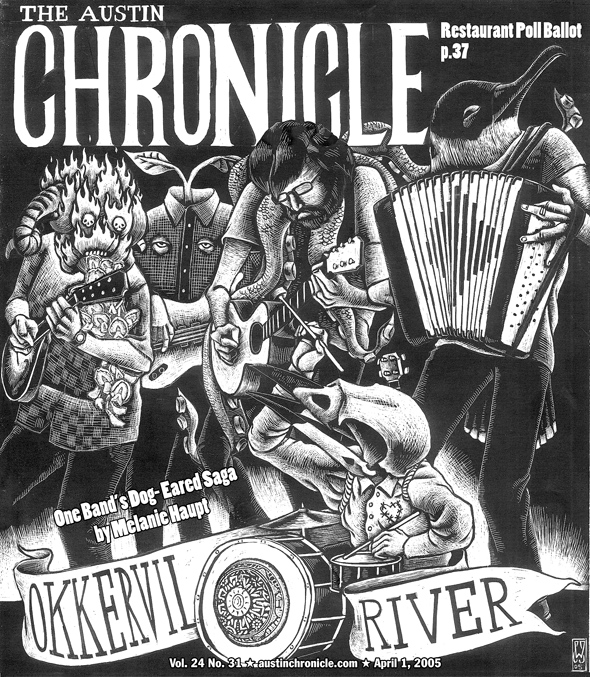 Check it, yo
news

Quality of Life for Blacks in Austin: Going Beyond Midtown

The city's treatment of blacks – both governmentally and culturally – is questioned

An Austinite in Iraq

Local man describes the progress, failures, and dangers in Iraq after humanitarian work there

The little guy takes on Clear Channel and wins, sort of

Terry Keel is qualified to comment on the death penalty, and you're not

Details of e-mail exchanges between nightclub owners and city manager

The evil genius buys some huevos

As the Lege turns the corner, there's still plenty of time for trouble

Odds and ends from the 79th

Journeyman chef Charles Mayes knows how to run a restaurant

From shoe-shopping to problematic ordering to reasonably good refueling

While dining recently at La Terraza, we couldn't help but think about the lucky folks that stay next door at the La Quinta at the corner of I-35 and Oltorf
music

Okkervil River navigates the headwaters of its career

Saw It on the X

Going yard with a litany of baseball songs, a hot-rod show, and Trail of Dead

The Man, His World, His Music, Live at the 40 Watt, End of the Century:The Story of the Ramones

Sings the Who Sell Out

Action: The state Senate and House incentive bills are in committee; a 'Scanner' delay; plus, Marc English, Joe Conway, and Sandra Bullock

It finally happened. I am in that group PBS courts during fund-drive time with those extended remember when' music special.

Some kind of first for nearly everyone involved, the incredible 'Carrie' is done justice by its incredible DVD extras

A program of eight short films nominated for live-action and animated Academy Awards in 2004.

The Ballad of Jack and Rose

Amiable Queen Latifah comedy is the latest offering from the Barbershop franchise.

Hitler's final days in the claustrophobic bunker are envisioned by the filmmakers, with an able assist from Bruno Ganz at the Fuhrer.

Woody Allen literally imagines a scenario as both a comedy and a tragedy, but we can't understand why half of this movie isn't at least amusing.

An off-the-grid family copes with depression and a tax audit outside Taos, N.M., in this warm and unusual drama directed by Campbell Scott.

Stephen Mills' journey into the Holocaust leads a community toward tolerance

The Ones We Owe

The Liverpool Institute for Performing Arts is making a rare visit to America to audition Yanks, and Austin is where it's happening

'Sky Above, Earth Below'

'Sky Above, Earth Below' reveals the interest in the spiritual aspect of art shared by Stella Alesi and Connie Arismendi
columns

Anyone who tells you the impact of a smoking ban will be negligible doesn't appreciate that it's the very number of Austin music clubs, including the swarm of the more marginal ones, that enables the scene's vitality

Who is the Best Fashion Writer? Just ask the Saxon Pub! See inside for more details.

The following examples of government mismanagement ought to be April Fools' jokes, but they're not

Resistance: What does it really mean?

Are bioidentical progesterone pills similar to the natural progresterone cream in the treatment of menopausal symptoms?

What is double jeopardy?

BY LUKE ELLIS AND CHERIKA PROCTOR

Down but not out for U.S.; and the champs welcome Chivas to MLS