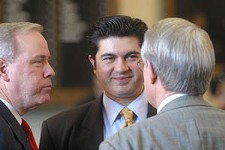 The Face of District 51

A young politico works to preserve an old neighborhood

Longtime Republican testifies ... for the Democrats

Smoking Ordinance Headed for the Ballot

Onward Austin gets its anti-smoking signatures

Republicans pass HB 2 out of committee over educator objections

Costello Puts Up a (Toll) Roadblock

Taking the TAKS Is Hard … Understanding the Results Is Harder

Too much testing, not enough learning, says legislator

Neighborhoods speak out on development plans

Coffman settles with spammer at $2,000 a pop

BY LEE NICHOLS AND DIANA WELCH

The conversation resumes on how to remake the second street district

The gambling action heats up at the Capitol

A Big Corp. becomes Big Brother; and, the SEC decides corporate reform is a 'stale' issue

The Return of the Fajita King

After 35 years, Sonny Falcon is still getting his strip- steak story straight

Just Exactly What Is a Fajita?

I Have Always Been Here Before:The Roky Erickson Anthology

Get Visionary With Me Here

We are no longer pioneers of the digital age. We're miners.

Where is Malcolm Gladwell's mind? What about now?

Not Shutting Up Anywhere

Superbadass Web Sites for Everyone!

With the help of Knowbility's AIR-Interactive for the Arts and a team of professional designers, I am going to help reinvent the Internet

Why modern-day muckraker Ana Marie Cox couldn't care less about her critics – or even, at times, her audience

Things to Do for Free

It Doesn't End With the Internet

This Town Is Big Enough for the Four of Us

There's a new place to get drunk, full, and filmically informed, but it's still the Alamo Drafthouse

No good deed goes unpunished, just ask Mopac Media's Kevin Triplett; plus, Explore UT and awards all over the place

Lots of midseason premieres in March. So, without much fuss, here's what's coming up ...

The follow-up to Elmore Leanard's Get Shorty is rife with star talent but short on inspiration.

Spanish drama avoids the politics of gay adoption while focusing instead on realistic characters and situations.

Bollywood romance glosses over the cultural ramifications of marriage and adultery, but is heavy on the music and melodramatics.

The latest from the Scream team hardly merits a weak yelp.

This mix of amnesia, time travel, and Adrien Brody adds up to a fairly forgettable experience.

Filmed in Austin with Tommy Lee Jones, Man of the House is nothing to write home about.

Do It Yourself Biennial

The Man Who Would Be Swing

A new play gives Ray Benson the chance finally to chat with the King, Bob Wills

A First for Austin Art

The symphony, Long Center, and Blanton Museum of Art have all seen lots of green sprouting in their yards lately

Images of coexistence on Auditorium Shores, artists wanted to leave gifts in the urban landscape, LCP on TV, and '25 to watch' at the Austin Fine Arts Fest

In director Lucien Douglas' staging of "A Midsummer Night's Dream," folly comes to the fore and makes for pretty pleasant company

In the spoof Single Wet Female,' Marga Gomez and Carmelita Tropicana mounted a delectable feast of perversions, inversions, and subversions for the ravenously underrepresented

In concept, the Boulez Project was somewhat provocative, but in performance, it was carelessly assembled
columns

South by Southwest 2005 is upon us. Please don't tell us to relax.

Our Ecstatic Days' is that rarest of creatures: a great novel. The first great American novel of the 21st century. Steve Erickson has discovered the secret of creating a novel that is not a book but an organism. Proust did it. Joyce almost did it. Faulkner sometimes did it. Marquez did it. Yes, that's the company Steve's keeping in Our Ecstatic Days.'

Meds side effects got you down?

Does dairy consumption at a meal interfere with iron absorption?

Charles Kincaid's Grocery Market in Fort Worth consistently gets listed as one of the best burger joints in the U.S.

The Premiership may not make the final eight in European championships