pdf
ON THE COVER:
Are You Decent?
news 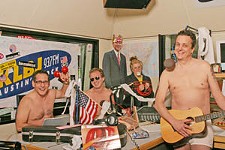 The Rumble at Bunny Run Heads to Council

Neighbors say school reneged on promise of no apartments

City Attorney Report on Knee Calls for Changes at APD

Talon News scandal reaches all the way to Williamson County

A roundup of what to expect today at City Hall

Recall petitioners look for a battle they can Wynn.

BY MICHAEL KING AND KIMBERLY REEVES

Point Austin: They Toll for Thee Two books, one old and one new, zero in on seafood and soups

The Meat Shop shuts its doors in anticipation of SH 130; plus, the Shoal Creek Saloon's Ski Lodge and Quack's Maplewood Bakery

Never a town to ignore fashion, Austin has its own set of worldly fast-food eateries selling everything from wraps to pasticcio. One of the newest is this Japanese grill.
music

Strong new albums from Milton Mapes and the Action Is, and the Eighties still won't go away.

Kicked Off, Adrian & the Sickness, Seven Chords and the Truth, Mother Heart

Bleeding All Over This Town

Underneath the Beer Light

From Aztlan With Love

Crispin Glover comes back to Austin with his What Is It?' in the can

Celluloid Zealots on the March

On Thursday, Feb. 24, the Alamo Drafthouse Village will host the third Bill Hicks Night, in part to celebrate the release of this collection

The stars are out already – just look around; plus Guadalupe Arts Center groups regroup and more industry news you won't find anywhere else

'Night and the City' and 'Thieves Highway'

There are no big surprises in this family picture, but neither is the admonition against working with children and animals appropriate here.

Bigger Than the Sky

Despite some bright spots in this woefully earnest modern romance, Bigger Than the Sky is awash in the obvious and sports a cloying adulation of theatre folk.

Adapted from Alan Moore’s groundbreaking DC/Vertigo comic title, Constantine is sure to divide the series’ most rabid fans, but those who can set aside their preconceptions will discover one of the more artfully designed comic-based films in some time.

What should be a battle of the sexes is more like a brief skirmish without any of the romantic tension that makes for an interesting – much less great – screen pairing.

It’s an only-in-America tale about kids in the Tennessee hamlet of Whitwell and their "paper clip project” – a teaching tool meant to help them comprehend the dimensions of the Holocaust – but it grew into something much, much more.

It’s not big and bright and busy and boffo, but it's a perfectly marvelous matinee option for young children. It’s a sweet little story, from a kid’s-eye view, about the anguish of being too little to do stuff.
arts & culture

Down at the Jinn Mill

The packed house at Zach on Feb. 12 showed that Austin was ready for Anna Deveare Smith, and Smith proved herself more than ready for Austin

Vin Gallery Rises From the Ashes

Like the phoenix of old, the Vin Gallery has emerged from the flames reborn

See a show and aid local theatres, catch some more Crush, show some dramaturgs how to two-step, and read up on Austin artists in national mags

Best of the Fest, Bill B

Its distracting title notwithstanding, the Concordia exhibition Is This Drawing?' features some intriguing visual work by outstanding Austin artists
columns

The capricious, political use of recall and referendum perverts and endangers the idea of our constitutional republic

Hobnobbing with the Style Avatar at the Grammys and ArtErotica!

Statistics on American education tell a dreadful story, the story of an advanced technological society slipping back to a state of ignorance and superstition

The first gratuitous use of an umlaut for a rock band