pdf
ON THE COVER:
The Outsiders
news

From Schools to ... Nuts

Feud between cyclists and residents comes to an end

TEA proposes a crackdown on failing charters, but can it be enforced?

News and happenings around Austin and beyond

Doctors not liable for drug use reporting, AG says

Latest dispatches from the drug war

ACC and AISD team up to create more collegians

You're Only Cheating Yourself

False testimony taints sentence for mom who killed her kids

Day One: Long on Smiles and Short on Dollars

Head for the hills ... the Lege is back in town!

Austin @ Large: Over and Out

Thoughts on the first day of the rest of Austin's life

No escape from cell phones, even in the skies; and, don't give up your biometrics!

Austin on the Hoof

An Epistle From Mick 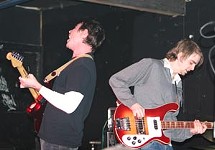 A New Year's Eve bout with cedar fever made me feel like 2005 is just an extension of 2004, and it looks like the same on the small screen

'Life sucks, and then you die. And then it still sucks.'

Bukowski: Born Into This

Every young writer goes through a Bukowski phase, but only the skid row author himself was "born into it."

Come to this movie for the prominent hip-hop soundtrack and glossy sports action; leave with a message about teamwork, decency, and self-respect scorched into your brain.

Don Cheadle, in the finest performance of his career, headlines this true-life story about the "Oskar Schindler of Kigali, Rwanda" during the massacres of 1994.

The swooning visuals, the expert choreography, the teasing love story, and the puzzle-piece plot all combine to provide this martial arts movie with the spirit of a star-cross'd swashbuckler.

In Good Company is a sincere but serviceable-at-best dramedy from Paul Weitz, one-half of the fraternal team that has already brought us two studies about the human male: American Pie and About a Boy.

Over the Christmas holiday weekend, two more Eastside theatres, the Vortex and Arts on Real, were burglarized

Though it has the episodic feel of a screenplay, 'Sonny's Last Shot' is, all in all, a satisfying evening of getting your jollies at the expense of the Texas Legislature

In Austin Lyric Opera's production of 'Elektra,' conductor Richard Buckley succeeds in conveying the complexity, richness, cruelty, and humanity of this work

Diaz Gallery was formed as a labor of love by Adam Diaz, a friendly soul who seeks to represent those artists who are passionate and involved with their work
columns

The perception that the liberal elite mocks the rest of the country and holds its values up to ridicule is probably critical to the whole positioning of moral values as a national issue. And it is only perception.

Stephen reminisces about his early love for drag and brings it all up to date with some S&M: 'Standing & Modeling,' of course

HIV isn't the only STD out there

As 'nanotechnology' enters into the field of medicine, what is now called 'blood spot testing' may emerge as the future of blood testing

A merry Christmas for Chelsea, and the power of a union