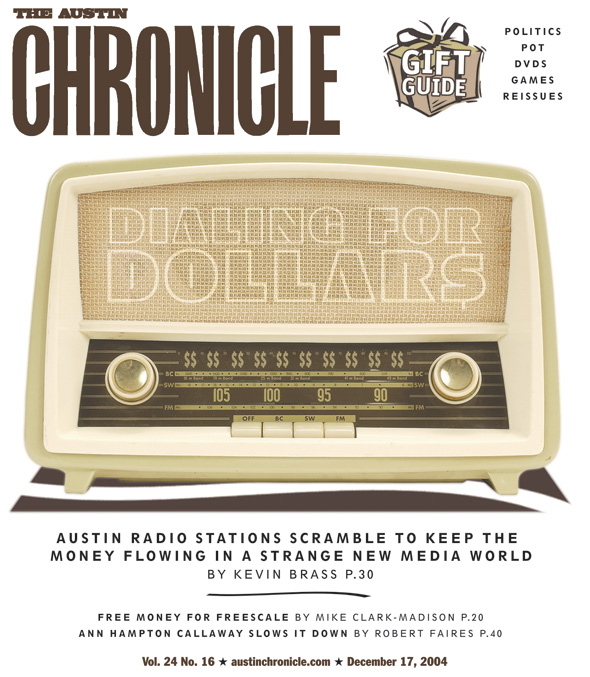 pdf
ON THE COVER:
Dialing for Dollar$
news

I love all radio, but my heart belongs to satellite

The Skinny on Satellite

She prefers her radio like her tomatoes: locally grown

Water Gushes Forth From LCRA

Where the Dope Don't Grow

For the Activist Who Has Everything

Many Unanswered Questions in Officers' Deaths

The DA Makes a Deal

They stole the Lege – will we get more in return than a sermon?

There's a word for that sort of thing. It starts with an 'F.'

Governments won't support local business, so we have to; and 'Support Our Troops' – and their families – must be more than rhetoric

The Pat Conroy Cookbook: Recipes of My Life

Foods of the Americas: Native Recipes and Traditions

Vanilla: A Cultural History of the World's Favorite Flavor & Fragrance

My fondness for community cookbooks is well known, and I've just received two that I can recommend for holiday gift-giving; plus, holiday tamales!

Assessing 2004, local club owners break into a chorus of 'Staying Alive.' If only Dimebag Darrell had.

History of Soccer: The Beautiful Game

Dr. Strangelove (Or: How I Learned to Stop Worrying and Love the Bomb): 40th Anniversary Special Edition

‘By the whole equation,’ David Thomson dares, aiming at nothing less than to set forth a single-volume history of Hollywood filmmaking in its entirety in under 400 pages, ‘I mean not just the history of American movies, but America in the time of movies’

The late train on AtomFilms.com

No more Moyers – now what'll we do for news?

A festival favorite jumps to the big screen with its story that compares and contrasts life as a gay black man in the present day and the Harlem Renaissance.

Flight of the Phoenix

Sticking closely to the tone of its predecessor, this remake of Robert Aldrich’s 1965 adventure film lacks the tang of the original, and trades the late-vintage Jimmy Stewart for the shirtless Dennis Quaid.

Thankfully, the dark tone of the beloved childrens books is carried over to the screen, and the terrific performances and production design provide extra lift.

'The Play of Daniel' revives the biblical prophet just in time for … Christmas?

For four ephemeral hours on Saturday, Dec. 11, Wooldridge Park was transformed into a giant sculpture

A series of shifts: Mike Clark-Madison departs, our redesign winds up, and 'Page Two' tries to find joy while democracy crumbles

What new discoveries are there in regards to vitamin B-12?

Basketbrawl – Self Defense in Texas

Indiana prevails, and a long winter's nap for international play