pdf
ON THE COVER:
The Supremes Take a Hit
features

The Supremes Take a Hit

The federalist smoke from medical marijuana reaches the Supreme Court. Can they clear the air on states' rights, pot, and the Constitution?

Except to the feds, medical marijuana is an easy sell

The Mueller deal is done, but that doesn't mean the process is over

Observer to History at 50

LCRA Gets Its Pipe On

One More Time for Miller-El

Dewhurst Plays in the Sunshine

Belo takes a chainsaw to its cable-news channel

New lawmaker comes to Capitol as election contest rages on

Los Alamos Up for Grabs

No need for a babysitter, Big Brother will do it; and Britain has moral scolds just like America 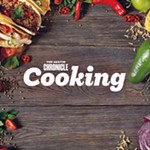 Poet of the Appetites: The Lives and Loves of M.F.K. Fisher

Cooking for Love: A Novel With Recipes

A Blessing of Bread: Recipes and Rituals, Memories and Mitzvahs

V.B.W. is serious about fruitcakes; plus, the Event Menu is in holiday heaven

Crunking up the holidays with a legal spat, an old- world reunion, Dolly, and Derek Smalls himself

Eyes Without a Face

The Wire: The Complete First Season

The OC: The Complete First Season

Under Tim McCanlies' Spell; plus, accolades aplenty all over Austin

In an unusual union between an indie-rooted movie network and another cable network specializing in sensational courtroom dramas comes a sustained, multifaceted discussion on one of the most pressing issues of our time: free speech

Originality is in as short supply as shirt buttons as Snipes' high tech vampire slayer meets up with what appears to be a steroidal Eurotrash pimp playing Dracula.

Johnny Depp delves into the mind of author J.M. Barrie in this adeptly realized celebration of the wonder of the imagination.

Like Soderbergh’s Ocean’s Eleven and 1960’s Rat-Packing original, Ocean's Twelve is an elaborate and delightful excuse to get the screen’s biggest and most gorgeous stars in the same film.

Cautionary tales about the pitfalls of indie filmmaking don’t come more searingly truthful or sober-minded than this.

Von Trotta puts a human face on 1943's Rosenstrasse uprising, one of the few public, and moreover, successful citizen protests against the power of the Nazi regime.

A Mexican and Canadian production, A Silent Love puts an unusual spin on some of the clichés of the romantic comedy.
arts & culture

Art as Big as the Great Outdoors

With Conspirare’s Christmas at the Carillon and Austin Civic Chorus’ Sing It Yourself ‘Messiah’, you’ll get a thrilling dose of that most potent Christmas commodity: song!

Art in Their Stockings

Giving the gift of art this season and don't know where to start? Try the Blue Genie Art Bazaar and the Gallery Lombardi 'Xmas Expo.'

Making his debut in 'The Santaland Diaries,' Rob Williams creates an elf who's not so naughty yet who keeps the show nice

Despite many glorious moments in St. Cecilia Music Series' Baroque Festival Concert II, there was evidence throughout that the musicians may have taken on too much
columns

The old political labels don't quite fit, but new ones have not yet evolved

'My love is an imperfect thing but it sings.' Those are the words to be carved on the tombstone of Michael Ventura's brother Aldo, an unstable soul who died last week.

Stephen is all about the holidays. Hide your peacock feathers!!!

Of Porto, PSV, and the Big Five