pdf
ON THE COVER:
Whack-a-Pol!
news

Check out your Lege district rep

Heflin, Hochberg, Mercer, and Mabry among the incumbents on the bubble

Incumbent is too partisan for moderate district, challenger charges

But what kind of experience? The D's and R's differ.

Levy goes off the rails, the GOP flunks geography, Bexar County races get physical, Nader gets help from a Friend of Rick, and Kerry wins the stoner vote

Felon disenfranchisement hits more than 3% of the state's potential voters

Lots of people, and only one missing (empty) ballot box …

Happy Trails to All at Austin Confab

Dick Ellis on TV, Then and Now

Can Austin Kick-Start the Hybrid-Car Future?

Travis County election officials have responded to complaints that voters casting straight-party Democratic ballots are discovering, when performing a final check of their ballots, that their votes for president have been changed from Kerry/Edwards to Bush/Cheney.

Property owner at MoPac and Slaughter gives up fight against city, Stratus

Rules of the (Toll) Road

Daily Not Into Big Breasts

The Statesman censors an ad by the amazing Maxi Mounds

'I Believe in Tolerance'

Why don't we protect Texas children? Because we'd rather not spend the money.

The big hole we need libraries to fill

The Bushites harass a grieving war mom; and the prez cozies up to Pervez

The Wines of Jerez

We celebrate Texas Wine Month and anniversaries all around, check out some new ventures by some old friends, and ask for St. Elias' forgiveness

The Ballad of Joe Hill

Get up, stand up – stand up for your rights

Hip-Hop Home of the Brave

B-boy provocateurs get organized this election

Blood of the Ram

Captain of the Town

A Five and Dime Ship

The Way It All Would End 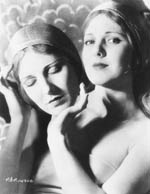 Talk of the Town

The Films of Jean Arthur

No Film Left Behind

Films to see before you vote

Spongebob and the Lips converge on Austin Studios, and the local IMAX pumps up its technology for 'The Polar Express'

Family elixir is by turns weepy and hilarious, a little bit Caine and a whole lotta Walken.

Epic oral history of the heyday of the Great White Way as told by the people who were living on graham crackers and dreams back when it was all going on.

Reactionary film claims to reveal the truth behind the lies of Fahrenheit 9/11.

End of the Century: The Story of the Ramones

The scruffy, seminal punk band that put the Bop in the Blitzkrieg is given its due in this treasure-laden doc.

New American version of haunted-house film follows the same tack as its Japanese predecessor, but is strangely neutered by its infusion of blond American actresses.

Born and bred L.A. narcissist Pauly Shore turns auteur for this comedy film outing about … himself.

Physics and metaphysics mingle in this minimalist yet intriguing fiction about inventor-scientists who discover a technique of time travel.

Money can buy happiness goes the moral of this cynical yet mildly amusing comedy starring Ben Affleck and James Gandolfini.

Sometimes people grow up sane despite the best efforts of society to drive them mad. So it is for Jonathan Caouette, who with this film assembles his life into his art.

Based on a novel by Bishop T.D. Jakes, a black evangelical preacher and author who also co-stars, this unusual film is part revivalist sermon, part narrative drama, and wholly urgent and engaging.
arts & culture

Triumph of the Yellow Kid

Comics are art, Spiegelman notes in his panel-busting history lesson

The Violet Crown Radio Players are re-creating Orson Welles' infamous radio version of 'The War of the Worlds,' and this time, the Martians are landing in Central Texas

KDH Dance joins KDNY in NYC, Kate Catterall tells us how public memorials can heal, the city wants faces of Austin City Hall, and the UT String Project wants anything you have to sell

With Dracula: A Woman Scorned, a gender-swapped variation on the classic vampire tale, it's tough to tell if a chick & a dude productions were going after sleepless nights or camp

A functioning democracy is a very hard thing to love, and even harder to trust

Check it out! Stephen gets a little 'boot'y …

Shark defense from the one-armed bandit

Is goat milk better for you than cow milk?

Effects of common-law marriage in Texas