pdf
ON THE COVER:
Love Is All Around
news The Lance Armstrong Foundation and the spirit of its founder

Welcome to the Ride for the Roses

A snapshot of this weekend's festivities

Lance talks about his work with the LAF

The foundation has grown steadily and strongly

The LiveStrong wristband is an international hit

Samantha Smoot recounts her work with the Texas Freedom Network

What's a Constable to Do?

Candidates clash over job descriptions in Precinct 3 and 5 contests

A 'user's guide to democracy' with regime change in mind

Listen to the Candidates Debate ...

A Med-Mari Challenge to HHS

Advocates petition the feds to change their tune on medical marijuana

Activist groups beg to differ with the city's big-box report

The Chronicle's picks in the Nov. 2 election

The regional transportation plan's vision is bigger than its wallet

From Heaven to the Springs

Chalking Up the Charters

Are they 'campuses' or 'districts'? Both, the TEA says.

Crunching Numbers And Kids at CPS

Has GOP fiscal austerity put children's and seniors' lives on the line?

Austin @ Large: To Preserve and Thrive

Alvarez and Thomas' Eastside plan needs fine-tuning, but it's about time

Mad scientists and Big Brother … maybe we should be paranoid! 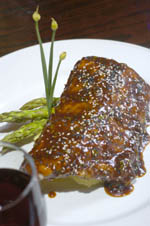 After more than a decade, Mars' adventurous menu might not be as challenging as it once was, but it's still one of the best in town

Everything is still happening in October!

Ben Wash's welcoming greeting, big smile, and positive outlook are once again drawing in the folks from the neighborhood and the throngs of smoked meat faithful

A rock out, a rock opera, and a rock show. Must be Rocktober.

Abattoir Blues / The Lyre of Orpheus

50 Ways to Leave Your Lover

Down to the Bone

Unconstitutional: The War on Our Civil Liberties

A Smattering of Shorts

Brief but sweet offerings from this year's Austin Film Festival

Matt Stone and Trey Parker take on terrorism, celebrity, and the perils of puppetry

Keepin' 'Em on the Farm

Sanitized for your protection

Amusing comedy with a killer cast seems like it should be a lot funnier than it ultimately is.

Kids adventure movie stars a boy and his prize steer – and a host of star cameos.

Head in the Clouds

Charlize Theron, Stuart Townsend, and Penelope Cruz co-star in this stilted romantic drama set against the background of Europe between the wars.

Raise your voice and just say "no" to Hilary Duff as a wannabe singing sensation.

Richard Gere, Jennifer Lopez, and Susan Sarandon co-star in in this tempting remake of a Japanese film about a man's midlife slump.

When it comes to Lone Star art, Rebecca Cohen wrote the book (finally!)

A Good Town for Dreaming

Austin gets inside the West Texas capital of contemporary art

Peter Pan vs. the Longhorns

Peter Pan has more than Capt. Hook to worry about this weekend. He has the whole Longhorn football team breathing down his neck.

Mail to the Chief

Vortex Repertory joins 27 other theatre companies from coast to coast in readings of 'Dear George: Letters to the President,' a theatrical presentation of actual letters from Americans across the country

October is Art in Public Places Month, and the Austin Shakespeare Festival invites you onstage

As we approach the most pivotal election since 1860, the work of Stirling Silliphant comes to mind because he shows that our present situation was not created by 9 / 11 but has been brewing for a long time

(Y)Our Style Avatar, Stephen M.M. does the party circuit and still manages to keep himself on time in order to serve you, the fashion slaves of Austin

The sense of smell is vital for good health

Tough times for UT; Dallas burning for a playoff spot