pdf
ON THE COVER:
Best of Austin 2004
features

Will TRMPAC Mess Stick to Baxter and Stick?

The GOP freshmen play defense in the campaign-cash scandal

Ronnie Earle and the Travis Co. grand jury announce the initial results of the TRMPAC investigation

A list of the persons and corporations indicted in the TRMPAC investigation, and the charges against them

Changing Channel 15: Who's Got the Remote?

The AMN/AMP/ACTV saga goes down to the wire

John Walters turns up the heat against medical marijuana initiative

Campaign Reform, On the Air

Face-to-face dialogue between opponents? Can't have that!

Come and Get Your Lead!

TCEQ turns up the heat in the toxic-TV-tube saga

The daily keeps 'Boondocks' away from gentle readers

Clearing the air over the queen of Texas parks

In the wake of the TRMPAC indictments, the big players are scurrying for cover

Get ready for the sweatshop tsunami; and Congress gives itself a raise 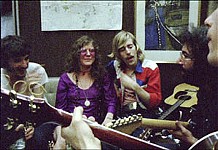 'Cowards Bend the Knee': the autobiography of an original in all senses

Vincent Gallo's notorious film turns out to be an anti-action road trip that has the feeling of a fever dream.

Hurtling across Canada during the summer of 1970 was a trainload of musicians – among them Janis Joplin, Jerry Garcia, and Buddy Guy – who partied and played music ’til the very end of the line.

This movie's tortured young protagonist and clueless dad just happen to be members of the First Family of the United States.

This nonpartisan documentary seeks to identify the sparks that made John Kerry and so many others of his generation so eager to serve their country.

Spike Lee strikes out with his new "joint" about an unemployed whistle-blower who makes a living impregnating sperm-deprived lesbians.

Two years after her debut with the Austin Symphony at age 14, Caitlin Tully offered a superb, assured performance, with a cool mastery of a demanding Sibelius concerto
columns

Strange ranchfellows; and the real king of the Jews?

In their behavior and beliefs, Ralph Nader and George W. Bush are twins separated at birth: Nader's candidacy is an act of perfidy

The best small towns in Texas

Are vitamin D supplements necessary for everyone?

UT against the ropes; first Europe, then the World