ON THE COVER:
If You're White, It's All Right
news 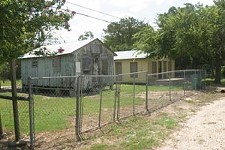 If You're White, It's All Right

The colors of justice in Williamson County

For fair prosecution, the numbers just don't add up

Lining Up for Schlotzsky's

The St. Andrew's pastor says a Presbyterian trial is 'what needs to happen'

Nuke Waste: Get It While It's Hot!

Ronnie Earle and the Travis Co. grand jury announce the initial results of the TRMPAC investigation

A list of the persons and corporations indicted in the TRMPAC investigation, and the charges against them

A Beginning for 'The End'

Angelina Eberly returns to the scene of the crime

Stick Stuck on His Study

After 16 years in jail, an innocent Cuban refugee gets his green card

Dan Rather takes one for the president

Party for the Right to Read

No Go for Jane Roe Yet

Nuke-lab bid cools down, but not entirely

TCEQ: Get the Lead Out

Well, if it isn't Brian Ferguson! What a surprise!

The Challenge of Judge Dietz

No Child Left Behind leaves the funding behind; and Richard Perle bungles on the battlefield and in the boardroom

If you weren't at Eat, Drink, Watch Movies on Sunday night, you missed quite a party. Time to thank the people who made it possible.

ACL 04: They're only feet, and "TCB" didn't need them anyway

Michael Almereyda on 'This So-Called Disaster'

This week: Burnt Orange, Blood Shots, and 'Slacker'; plus, Travis the Dancin' Fool

For 'Veronica Mars' and 'Kevin Hill,' the journey's the thing

An immensely informative and provactive documentary about the growth of corporate entities within the legal sphere, marketplace, and human imagination.

A Day Without a Mexican

What if Californians awoke one day to discover that all the Mexicans in the state had mysteriously vanished overnight?

John Waters, America's king of trash, is back with this tale of sex addiction, fetishes, and mad, bad, lascivious squirrel sexin’.

Shaun of the Dead

This "romantic comedy … with zombies" has a note-perfect mix of humor, horror, love, and death.

The most costly and the most popular film in South Korean history is also one of the most gripping and epic war films ever made.
arts & culture

After seven years, the 'Chronicle' is returning arts reviews to the Arts listings and saying farewell to the 'Exhibitionism' page

New gifts to the Long Center, a new Little Elf for 'Santaland,' a new name for the AMOA Guild, a retirement at the symphony, and a return to Venice for Allison Orr

The Zachary Scott Theatre Center production of 'Omnium Gatherum' starts as captivating, then rounds a hairpin turn to become compelling

For being in such an offbeat space, 'Construction Site' is one heck of a show. Large, ambitious sculptures and site-specific installations make it worthwhile to seek out this temporary venue, located on the ground floor of AMLI Downtown.
columns

Here in filmtown, 'Slacker' is on DVD (finally) and 'Louisiana Boys' is on 'SXSW Presents.' Meanwhile, despite the lack of a Hussein connection, the Iraq war is a triumph for the 9 / 11 terrorists and their co-conspirators.

Stephen weighs in on the whole Cipel / McGreevey thing (you know, the gay governor scandal), and lucky for us, we have never made untoward advances toward Our Style Avatar, especially now that we know how he feels

Ben Franklin & Gandhi battle it out with Franciscans

Marshall, in the northeast corner of the state, has one of the most colorful histories of any Texas city

Forteo, the new medication for osteoporosis

Security obligations of the landlord