A ringside seat at the AMN/AMP/ACTV death-cage match

A ringside seat at the AMN / AMP / ACTV death-cage match

Pain, pain, go away, come again some other day

'The Time to Speak Is Now'

Neither Efficient nor Adequate

Another major clean-energy event brings the world to town

Renewables a boon for Texas, and a clean-energy roundup in Fredericksburg

Muslims gather at the Capitol, while clerics swap pulpits on Sunday

Undeterred by the courts, the feds continue California grower raids

The comptroller says starting school in August costs Texans many, many mil

Austin @ Large: Wreck on the Highway

Why the dogs can't catch the toll road speed machine

Castle Hill Cafe, an all-time Austin favorite, is not resting on its laurels

Eat, Drink, Watch Movies is back in a big way with a great cause; plus, there are a lot of restaurants in this city!

Where the low-carb craze hasn't found its grasp

Everything you need to know

The Soundtrack of Our Lives

Looking Out My Back Door

Commemorating the 30th Anniversary of 'Austin City Limits' with 13,000 words. In pictures.

You Call It Madness

Everybody Loves a Happy Ending
screens

Buggin' out at IMAX

Celebratory habits of the Austin arthropodophile: a Saturday at the Bullock

Dispatch No. 2: World of Wonders

Dispatches from the Toronto International Film Festival: No. 3

The Conrans will 'Captain' 'Princess of Mars'; plus, Linklater headed for 'Bad News'

'Lost' is 'Gilligan's Island' meets (choose one): 'Rashomon,' 'The X Files,' 'The Twilight Zone,' 'Survivor,' 'Lord of the Flies.' But it's also one of more interesting new shows this season.

Ghost in the Shell 2: Innocence

This Friend-of-Bill doc recounts the hard-right campaign to cut short the Clinton presidency.

You can't keep a bad zombie down.

Sky Captain and the World of Tomorrow

This CGI adventure yarn is a loving tribute to all things retro-futuristic.

This queercentric romantic comedy gets its inspiration from culture clash and the ghost of Cary Grant.

A terribly tender, good-hearted romantic comedy from across the pond.
arts & culture 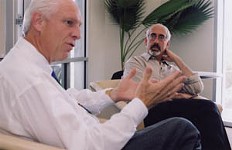 Long Center director Cliff Redd and ALO director Richard Buckley compare notes on leading an arts institution, the challenges they face, and being new to Austin

Two 'Hot' for Your Eyes

For Camp Fig's new show 'Hot For Teacher,' 100 artists were given a small chalkboard. Their homework assignment? Make it art.

The Death of a Cat

C. Denby Swanson's unconventional new play, 'The Death of a Cat,' takes us into a weird world as dark and funny as an Edward Gorey cartoon

In ASO's season opener, Peter Bay did justice to Verdi, Brahms, and Bartók while maintaining the enthusiasm of his orchestra and its audience
columns

Pink and brown are just not cutting it anymore, people. Get with the program. Plus … you know … more shilling for stores and stuff …

Meds side effects got you down?

All the economic numbers point one way: Hard times are about to get harder

I very seldom remember my dreams; does this mean I'm missing some nutrients?

Something less than galactico; and the Word was good